When you picture Alaska, you probably imagine lots and lots of snow. Rightfully so! Alaska is one of the snowiest states in the U.S., racking up an average of around 2,336 inches of snow each year.

But the weather phenomenon that just happened last week is insane, even for a state as snowy as Alaska.

On Wednesday, Dec. 6th, 2017, at Alaska’s Thompson Pass, outside the town of Valdez, there was a record-breaking snowfall. It wasn’t (by any means) the most snow any part of Alaska or the country has ever experienced, but it was one of the quickest accumulations of snow to ever happen in the states.

An unbelievable 10 inches of snow piled up in one hour – that’s around 1.7 inches every 10 minutes. In the following 30 minutes, another 5 inches rapidly fell, making a remarkable 15 inches in a brief hour and a half period.

By the storm’s end, there were 40 inches of heavy, wet snow accumulated within only 12 hours.

Imagine going to work in the morning without a speck of snow on the ground, and coming out at the end of the day with over 2 feet of snow on your car! That must have been incredibly shocking to see. 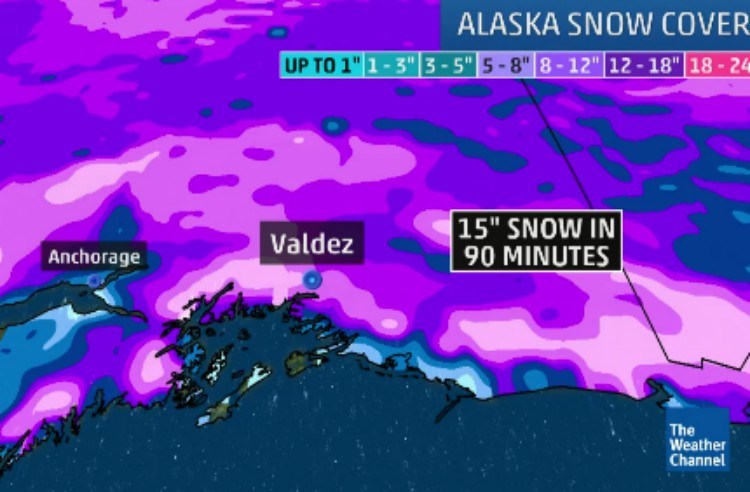 Apparently, the snowy phenomenon was due to an atmospheric river that was directed from the subtropic that’s due north of Alaska.

Since the snow was so intense and so sudden, the town of Valdez was left in a bit of a lurch. The town is in a very remote part of Alaska, with the only way in and out being a road called Thompson Pass. The Pass was closed for the day and through the night as plows struggled to keep up with the rapidly falling snow.

Local news channel KTUU reported that one car did slam into the snow while trying to drive on Thompson Pass, but no one was injured. And, in general, none of the residents seemed remotely phased by the crazy accumulation of snow.

“Some of us welcome it,” Bob Engebretson, who works at a local airport, said. “You hear the highway is closing and you just sort of breathe a sigh of relief, like yeah, it’s all ours now! It’s a beautiful place to live and sometimes it’s nice to kind of have it all to ourselves. You sort of enjoy that cozy cooped up feeling. It starts to feel like Christmas, I guess.”

Well, we suppose you have to enjoy snow if you choose to live in remote Alaska! Hopefully, everyone in the Valdez area, and all over the state, will stay safe this winter and enjoy their snowy holiday season.