The Tonight Show Starring Jimmy Fallon
Adam Sandler is known for a lot of things—his recent role on Uncut Gems, his hilarious movies, and of course, his comedic song-singing (Thanksgiving Song, anyone?). So it only makes sense that Sandler would perform a quarantine song in light of the coronavirus outbreak.

Not only is the song meant to be entertainment for those who are home and longing for something to do, but it’s also a nod to the great healthcare workers doing their part every day to keep the world safe while they risk theirs.

But of course, it wouldn’t be Sandler if some comedy wasn’t thrown into the mix. He appeared on the Late Show With Jilly Fallon (via video chat, of course) to debut the song.

The song begins taking note of how doctors do it all among the circle of life—from giving you life when Mom gives birth to taking care of grandmas at the end of their lives—plus, they give you a lollipop when you’re a kid. I mean, are there any greater heroes out there?

Don’t worry, he isn’t poking fun at their jobs. In fact, he gets kind of serious among the chorus.

“Doctors and nurses will save us from this mess if we get them the supplies that they need,” he sings, adding another line for the laugh, of course: “And I hope they save it soon because I’m really really sick of my family.” 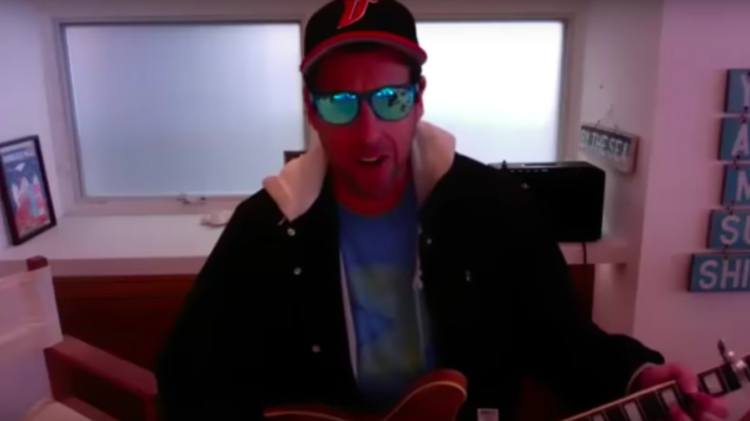 Aren’t we all? (Just kidding!)

The song continues to address everyone doing their part, from school nurses to doctors in Italy and Spain and Chinese doctors (in both China and the U.S.).

The takeaway from the song? The ending nails it: “Stay home as much as you can, make sure to wash your hands to make this damn thing go away,” Sandlers sings. ‘We love you doctors and nurses, you’re saving lives every day. Find a cure for this s**t because I really, really miss hugging my… mailman.”

In all seriousness, behind all the jokes, Sandler makes some great points in his song. Plus, it doesn’t hurt to have a laugh right now, does it?

To hear Adam Sandler’s quarantine song, check out the video below.

Adam Sandler isn’t the only one making up songs about coronavirus and staying home. Don’t forget to check out former Voice contestant Chris Mann’s remix on Adele’s “Hello.”

What do you think of all these quarantine songs coming up? Where does Sandler’s rate on the funny scale for you?