Guess Who Just Had a Baby Boy

Not too long ago, news of actress Rachel McAdams expecting a child erupted all over the internet. For a while, we weren’t sure if it was just a rumor, since the actress hid the pregnancy and her bump so well.

It wasn’t until she missed the premiere of her latest movie, Game Night, that people started to really question whether she was preggo. Before that, she was keeping a particularly low profile, even more so than normal. If you’re a Rachel McAdams fan – a.k.a. if you’re a human – you know she likes to keep out of the spotlight, but this was unusual, even for her.

Another tip-off was a photo of her taken around the same time at the Toronto Airport, where she was donning a very large, baggy coat. And apparently she was holding purses in front of her stomach before that, which seemed a bit sketchy.

Anyway, by the time the pregnancy rumors were confirmed, she was about seven months pregnant. And now we’re here to tell you that she’s officially given birth! It’s an adorable baby boy, and Rachel and Jamie Lindin – her boyfriend and the baby daddy – are so in love. 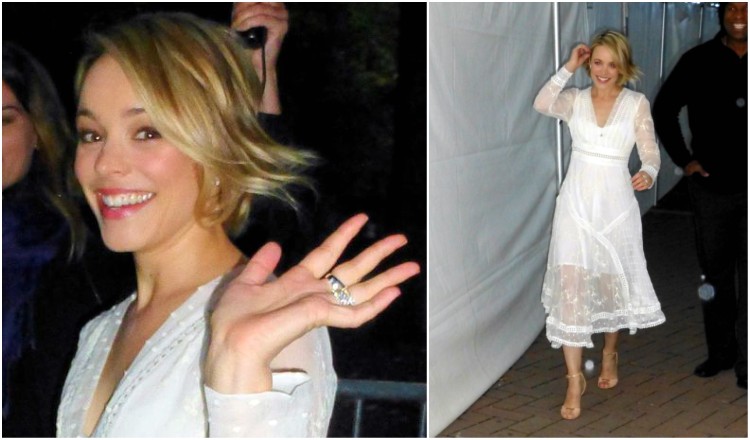 Lindin is a screenwriter most famous for writing the scripts for Dear John and We Are Marshall. He’s worked with famous actors and actresses including George Clooney, Julia Roberts, Tom Holland and Daisy Ridley.

So basically, their baby is going to be surrounded by some pretty talented and awesome parents.

We’re also guessing the baby is going to be surrounded by tons of love. In fact, he already is! Holywood Pipeline were the first to post photos of the happy couple and their newborn. The two were spotted out, Jamie carrying the little one as they left lunch. They reported that Rachel and Jamie were heard talking about how good of a sleeper their son is and how he’s “a good baby.”

While we’re not quite sure of the exact date Rachel gave birth to her son, we’re guessing he’ll be a real private baby, just like his parents. Between all the secrecy when it came to this pregnancy, Rachel and Jamie also kept their relationship pretty private from the start.

They were first seen together in 2016 while holding hands and walking together in Paris, and that’s when the rumors flooded. But she and Jamie don’t even walk the red carpet together. Besides Paris, one of the only other times we’ve seen them together in photos was at a wedding in June 2016!

This is both Rachel and Jamie’s first child. At 39 and 37 respectfully, some might wonder why they didn’t have a baby earlier. Back in in 2010, she told InStyle: “Part of me is very attached to the idea of having children,” adding, “It’ll depend on if I find the person I want to do that with.”

We’re so glad she finally found the right person to start a family with! We wish them so much happiness in this new journey together.

To learn more about Rachel and Jamie’s new life with a baby boy, check out the video below!

We’re so excited for this couple and their new addition! Something tells us they’re going to be great parents. Any guesses on what they named their new son?