On a night like any other, four Canadian teens were confronted with a terrifying situation: an inebriated young girl, being dragged through an underground parking garage by a man who claimed to be her father, seemingly against her will. What the young men did next would have them hailed as heroes.

Arnaud Nimenya, Carsyn Wright, James Hielema and Starlyn Rives-Perez were skateboarding in an underground parking lot at their local mall when they first saw the man and the young girl. The man was well-dressed and forcefully walking with a 15-year-old young woman, who appeared to be very drunk and disgruntled:

“She was screaming and yelling. She just wanted to be out of there. She was all scuffed up and dirty,” said Wright, one of the skateboarders.

Right off the bat, the boys knew something was wrong. They approached the man to ask him some questions about the situation, but he insisted that he was her “father” and that everything was alright.

When the young woman didn’t ask the boys for help or contradict what the man was saying, the skateboarders reluctantly decided to believe him and move along.

“You don’t want to really think of the worst in somebody like that. You don’t want that situation to be real, so you just brush it off and hope for the best,” Wright said.

But even after they left the parking garage, the four skateboarders still didn’t feel quite right about the situation. So, they decided to turn around a few minutes after leaving and check on the girl, just in case. 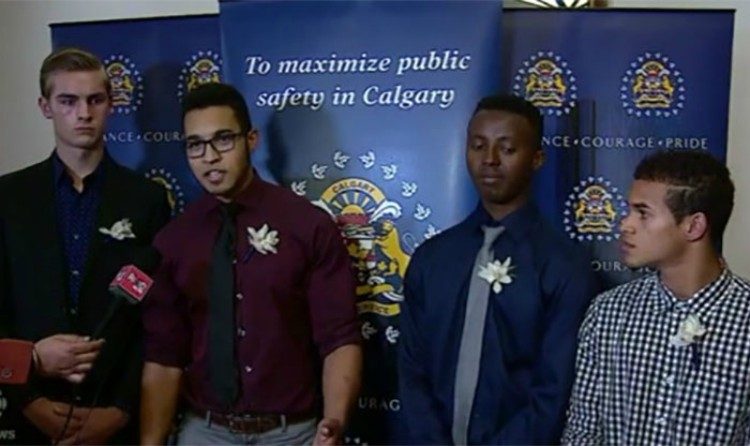 Well, it’s a good thing that they did.

When the boys arrived back on the scene, they saw that the man was sexually assaulting the young woman.

“You walk in, and you see something like that, and you freeze. You don’t know what to do,” Nimenya, another one of the young men, said.

That shock quickly faded though, and the teenagers sprang into action. However, when they approached the attacker, he abandoned the young woman and attempted to escape the parking garage.

“He was trying to walk out and walk away from us,” said Nimenya. “He pushed me aggressively out of the way, kinda like just gives me the smile, like, ‘I can do this. You can’t do anything about it.’”

Refusing to let him get away, three of the young men chased the attacker while one stayed behind with the intoxicated girl.

It wasn’t long before they caught up with the man, and unfortunately, the interaction ended up in a physical confrontation when the man picked up one of their skateboards and began to attack the teens. Thankfully, the police showed up soon after and arrested the man.

The young woman was safe and the four teens luckily left the situation unscathed, but the local police weren’t about to let these brave boys get away without some kind of public recognition.

To thank them for their heroism, the police department invited them to the Chief’s Awards Gala. All four would receive an award from Chief Const. Roger Chaffin in recognition for their exceptional bravery, something they certainly deserve.

What do you think about these brave teenagers doing the right thing, no matter how scary it must have been? Make sure to share this story with your friends and family!