If you are a single parent, then you know how difficult it can be to assume the role of primary caregiver and breadwinner. Paying the mortgage on a large house is usually completely out of the question for most. With that being said, there is a family out there who managed to accomplish this feat by finding a creative way to cut down on high construction costs. They simply built their own home!

In the late 2000’s, mother of four Cara Brookins was a statistic. She was part of the 1 in 3 women in the U.S. who was being physically abused by a partner. The situation was becoming increasingly dangerous, so she took her children and got out of the toxic relationship.

As the mother and kids were getting back on their feet, it became clear that they would not be able to afford to buy a house of their own. Nonetheless, Cara wanted each one of her four children to have their own rooms, so the diligent mom found a way to make it happen.

In an interview with local news station THV11,  Cara explains that the inspiration for the build came when she crunched the numbers and realized that she had enough money to buy all of the necessary supplies, but couldn’t afford the labor. That’s when the single mother took her family’s future into her own hands.

When she first told her children of the plan to build their own home from scratch, they were understandably incredulous. Cara’s daughter Hope recounts her initial reaction by saying that, at the time, she was thinking to herself, “How are we going to build a house?! We have no idea what we’re doing.”

Now, it’s important to note that Hope isn’t just being modest—they literally had no idea how to start building a home. Despite that fact, this forward-thinking family did not let a little thing like lack of construction experience get them down. They simply took to watching YouTube tutorials and asking whomever they could at Home Depot for advice on accomplishing the task.

The most amazing part of this story is that it wasn’t just Cara who was putting in all of the hard manual labor—each and every one of her kids had their part in completing the beautiful home. How special is that? 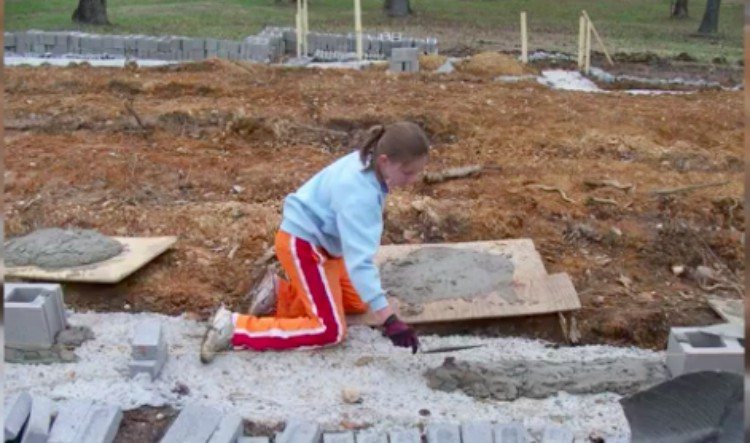 THV11
Her new memoir entitled Rise: How a House Built a Family has just been released to absolutely stellar reviews. And though the mother already has several middle grade and young adult novels under her belt, this is her first foray into the world of autobiographical writing.

When asked how she feels about her family’s story being made public, Hope smiles and says, “It’s quite a big transformation for her to suddenly share our entire lives with the world.”

You can say that again! It must have been quite the experience for Cara’s kids to see their entire lives written in the pages of a book.

To meet the family behind this incredible story, and to see photos of their finished home, be sure to click on the video below. What an inspirational story!

What do you think of Cara Brookins’ decision to build her own home? Have you built a home from the ground up? If so, what were your challenges? Tell us all about your thoughts and experiences in the comments section below!