Oprah Catches Up with This Prodigy 14 Years Later

In 2003, Oprah welcomed Akiane Kramarik, a nine-year-old who loved to paint. But Akiane didn’t just enjoy painting as a casual hobby, maybe in the way any kid loves to finger paint at school. For her, painting was her passion, her living, and her gift from God. You only have to see her work to immediately understand why.

When she appeared on Oprah’s show as a young child, she had already created 40 pieces that were selling for as much as $25,000. She loved painting portraits, mainly of others but sometimes of herself, as well as recreations of animals. And every single one is mind-blowing in quality.

As she walked Oprah through the paintings she had brought on for her first television appearance, we can hardly believe our eyes. The depth and realism in each painting is startling, and she credits having done some these pieces when she was seven and eight years old. She also tells Oprah that her incredible gift was given to her from God, which gets a touched round of applause from the audience. 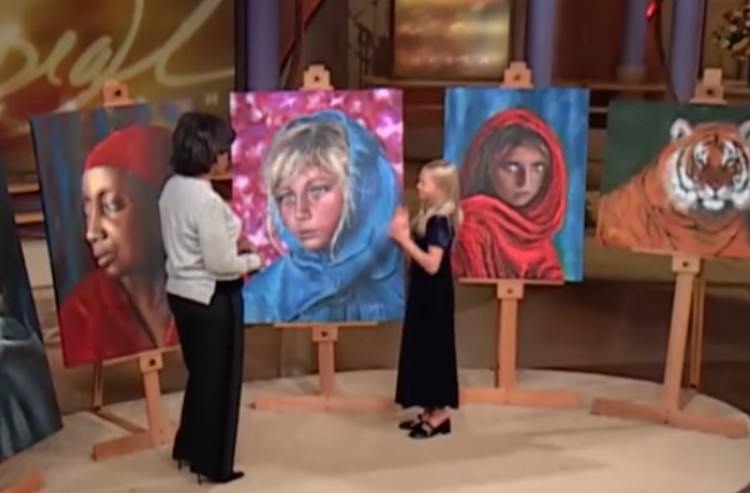 OWN
Fast forward 14 years to 2017. Akiane is now 21-years-old and the OWN crew wanted to check in with her to see what amazing things the child prodigy was up to these days. To no one’s surprise, she’s doing incredible things. Much of her residual success, she claims, came from that fateful day on the Oprah Winfrey show.

“Right after the Oprah Winfrey show, my whole world completely changed,” Akiane tells the cameras. “There were phone calls coming in left and right. It’s very interesting to be thrust into the spotlight at such a young age.”

Akiane tells us that she became interesting in painting at 4-years-old, and that she began by expressing her dreams and visions through whatever medium she had on hand. But as she’s grown older, her technique has become more trained and precise. We can see through one painting that she’s working on during filming that her focus on small details and realistic texture has definitely improved, and it brings even more life to her paintings than before.

Truthfully, some of these paintings look like photographs. That’s how vividly real they appear upon first glance.

Her amazing art career has allowed Akiane to take care of her entire family, especially since going on the Oprah Winfrey show; after that TV spot, her paintings started selling for hundreds of thousands of dollars. But even though these pieces are her passion and main form of income, they’re not the only thing this young genius devotes her time to.

Akiane is also an art ambassador, through which she’s traveled to 26 different countries and experienced dozens of unique cultures. She’s advised foreign governments about art education and helped to innovate creative programs in school districts that had none to speak of. And what’s more, she’s learned a lot about life, art, the world, and herself.

“What I know for sure in life is that I truly, truly believe, after traveling and experiencing a lot of cultures and meeting a lot of people, that the arts have the rare ability to unite and inspire every single one of us.”

What do you think of this artists’ amazing journey from then to now? Share your thoughts on Akiane’s amazing gift in the comments section below.