If you have a relatively new car, chances are you just approach your car and the doors unlock. That’s because new models come with a key fob that uses an electronic signal that indicates when you’re near the car. Ah,technology.

But with any new technology, there comes risks as well. And lately, there’s been an upsurge in thieves intercepting the signal of the keyless car model to steal cars.

How? First, it’s important to understand how this keyless system works. Basically, there’s a computer chip inside your key fob, which has a unique code made just for your car’s security system. Inside your car is another chip using the same kind of technology and codes. When the codes match up, it prompts the car to open the doors.

Most key fobs require you to be at least a foot from your car—so chances are, if you’re that close, no one is going to drive away in it, at least not without you catching them.

However, there’s something called a “relay box” that thieves use to grasp key fob signals up to 300 feet away, and then transmit them to your car.

“It’s an incredibly common occurrence and the easiest way to gain entry to or otherwise steal a high-end car,” said Campbell Murray, technical director of cybersecurity at BlackBerry. “A quick search on YouTube for ‘car stolen key amplification’ or ‘car key relay’ will return hundreds of CCTV clips where the attack is being undertaken.” 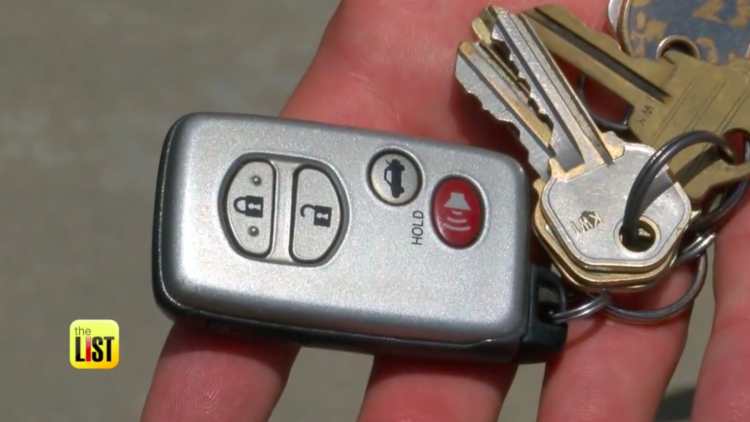 Another way criminals can steal your car is to get in between all these codes. While this is more rare, it does still happen. Each key fob and car security system has its own unique code, and each one is actually capable of creating billions of codes.

According to research from Radboud University in the Netherlands and the University of Birmingham, if there’s an interception in the wireless signal more than once, hackers are able to narrow it down to 200,000 possible combinations.

Once it’s narrowed down, a computer is capable of cracking the code in less than an hour and unlock the car!

The good news is that there’s a way to prevent hackers from capturing your key fob signals. It’s a pretty easy fix—one that won’t cost much money and won’t take up much of your time at all.

All you have to do is wrap your key fob up in aluminum foil. While the solution isn’t perfect—you know, like having to unwrap it every time you want to use it—it does work, and can keep you and your car safe.

“Although it’s not ideal, it is the most inexpensive way,” said Holly Hubert, a cybersecurity expert who retired in 2017 from the FBI in Buffalo, New York. “The cyber threat is so dynamic and ever changing, it’s hard for consumers to keep up.”

You can also purchase a faraday cage or faraday shield, which is used to block all major electromagnetic fields or signals. This can get pricy, so experts say to go with the foil if this isn’t an option.

It’s true…we now live in a world of wireless hijacking. For other ways to stop hi-tech car theft on its tracks, check out the video below.

Did you know this scam was so common? Have you ever wrapped your key fob in tin foil? Tell us how you’ll protect yourself from this kind of scam!