With most sports, people like to highlight their victories—and it’s no different with hunting. However, hunting is kind of a controversial sport to begin with, so we’re not too surprised over the outrage one woman is getting after hunting a rare breed of giraffe and posting about it happily on her Twitter.

Here’s the deal: Tessa Thompson Talley, a trophy hunter from Kentucky, was on a hunting trip in South Africa last year when she posted a photo of herself posing with one of the animals she had hunted—a large rare black giraffe. The photo soon went viral and, as you might imagine, animal lovers everywhere started to express their anger about it.

The outrage began when South Africa-based AfricLand website came across the photos and tweeted about Tessa with some very angry words: “White American savage who is partly a neanderthal comes to Africa and shoot down a very rare black giraffe courtesy of South Africa stupidity. Her name is Tess Thompson Talley. Please share,” the tweet said.

Many others who came into contact with Tessa’s photos felt just as mortified by the photos. “It’s shocking that anyone would take joy or pleasure in killing a beautiful and graceful animal like a giraffe,” said Iris Ho, who tracks trophy hunting at Humane Society International.

Even celebrities were fired up and had a lot to say about it. Deborah Messing wrote that Tessa was a ”disgusting, vile, amoral, heartless, selfish murderer” on her Instagram, ending it by talking directly to her (and her husband): “I am disgusted by people like you Tess. You reek of privilege and ignorance. Shame on you. And your husband Andrew Claude. Unconscionable. Irreparable damage. Irreplaceable beauty.”

Why do people engage in such a controversial sport in the first place? Well, hunting a giraffe can apparently earn you some big bucks—between $2,000 and $3,000 for a giraffe. 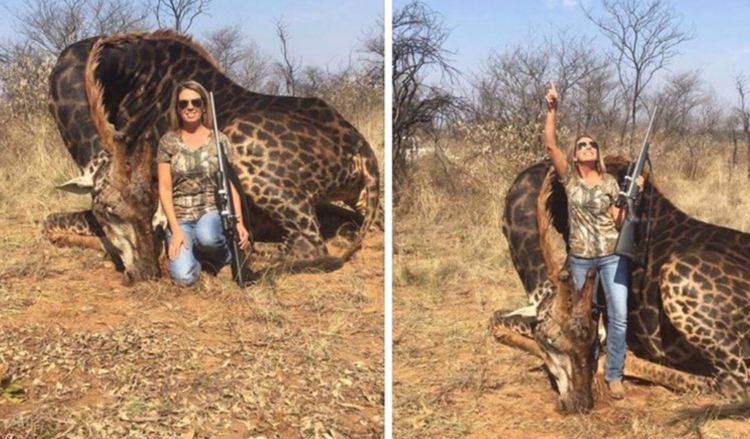 The type of giraffe seen in Tessa’s photos was a black South African giraffe with a black coat. The 18-year-old giraffe is a subspecies with a population of about $21,000; however, in general, the giraffe population has been dwindling, which is another reason people are pissed about it.

“U.S. imports, you know, almost 4,000 giraffe trophies for the last 10 years,” Ho said. “Probably every day there’s a giraffe being killed and imported into the U.S. as hunting trophy,” said Ho.

However, despite all the negativity, there is some positive to say about it too. “The money she paid to go on this hunt, it is going directly into the local community, it’s going to benefit those animals because now there’s an economic benefit,” said Paul Babaz, the president of Safari Club International.

As for Tessa, she is clearly very proud of her hunting, and called the criticism she’s getting sexist. “For all the people wishing death or even threatening death to me, this does nothing positive for your ‘movement,’ it only shows the world how lopsided your priorities are,” she said. “The very same picture could have been posted, and are posted daily, of men with their trophies and not a word is said.”

Do you know anyone who hunts? What do you think of posting photos of the prey you’ve hunted? Are you on Tessa’s side or the others?