If you like to travel, you know the rush it can give you; seeing historical sites can really stimulate the mind, body….and selfie action. I mean, what better way to commemorate seeing a popular tourist site than to take a selfie in front of it?

While most of us enjoy snapping that type of photo, one woman named Stephanie Leigh likes to do the opposite—she likes to “die” in front of these sites when she travels.

“Each photo is an ‘anti-selfie’ that strives to get back to the roots of what a photograph was intended to be—a captured moment in time,” she explains.

Stephanie started an entire Instagram page called STEFDIES, which has quickly gained a respectable following, of her playing dead on the ground in front of various popular sites.

“The series provokes discussion on mortality, the function of photography, and stirs the imagination,” Stephanie says of STEFDIES. “Nothing is premeditated or prepared in these photographs, the shot is captured in the moment as it occurs.”

While most of the Instagram world focuses on using lighting or special equipment to get the shot just right, Stephanie does do any of that. She wants her photos to encapsulate her simply going about her normal day, and when she finds a good spot to “die,” she does. 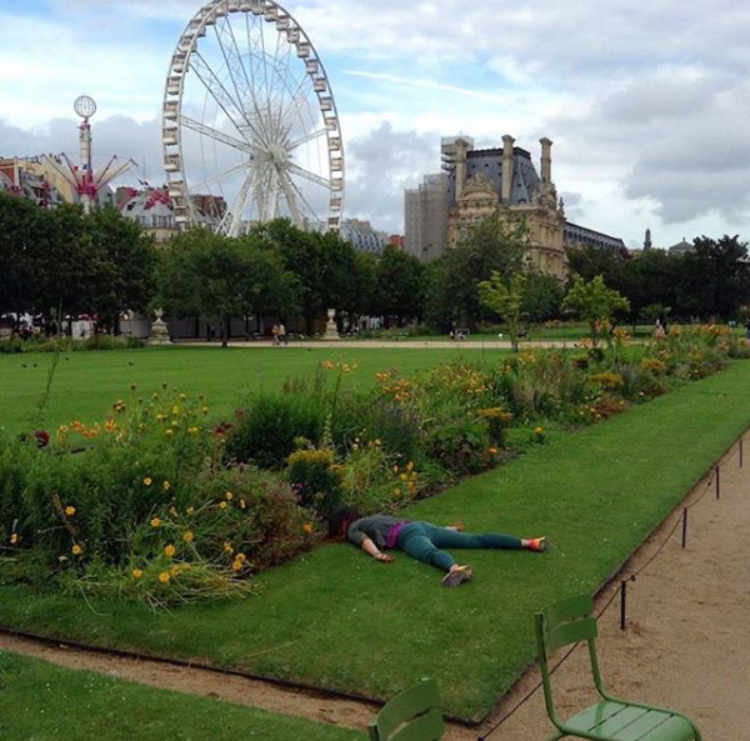 “That is the beauty of this series, each photo is just a blip in a day. Nothing less, nothing more,” Stephanie says. “It is the truest sense of what I believe photographs should be- tangible physical proof that “I was here.”

Stef has “died” in tons of spots all over the world—from cathedrals in Spain to beaches in Greece. She “died” in front of the Eiffel Tour in Paris, the Big Ben in London, and the Golden Gate Bride in California. She’s even “died” in smaller locations like donut shops, parks, and gardens. 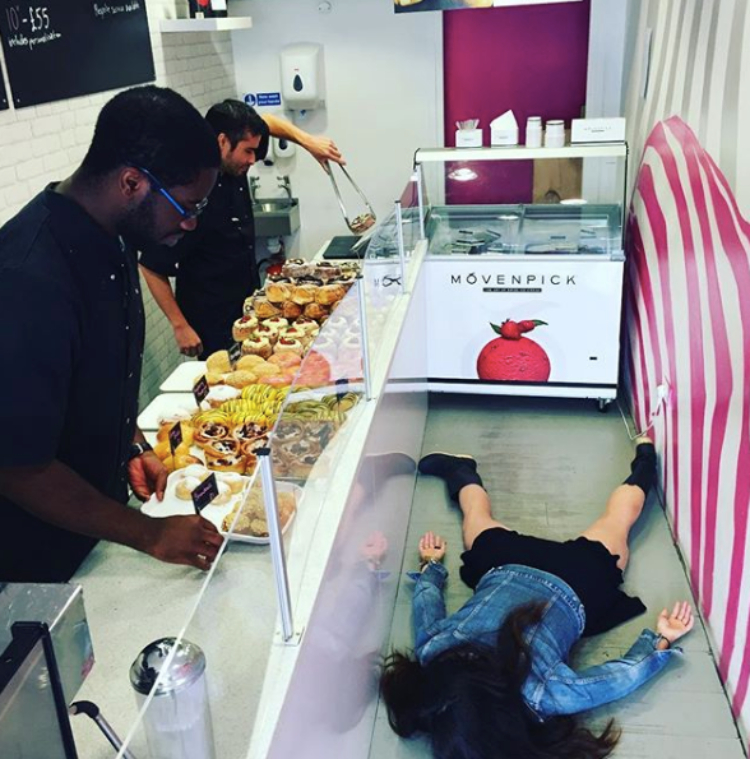 “I realized I wanted to continue putting something positive into the world, while at the same time using art to synthesize my feelings and thoughts regarding our impermanence on this earth. The official STEFDIES slogan is ‘leave a mark.’ I’d like to think I’m doing that,” Stephanie says.

One critic reviewed the STEFDIES trilogy in the review below perfectly:

The STEFDIES series reminds us we will one day die, like our face down figure. Hence seeing her in the photograph wakes up not only the image but us. Here is our dead body outside Big Ben… We are given the opportunity to ‘die before we die’ and really take in the moment in the photo as we must in life. It is not about death, it is about life. Here is Big Ben today. We cannot count on tomorrow. Let us celebrate these moments. How many more times will you actually see Big Ben in life? Your family at Christmas? etc. STEFDIES is a constant reminder of how precious life is. The breath inside is what we all ultimately seek.

What a unique way to think about life and death! What do you think of the idea behind STEFDIES?