Pet ownership is one of the most gratifying things that you can do in life. As a matter of fact, we’d be willing to bet that there are at least a few pet owners who feel that the bonds with their fur babies are actually just as strong as those with their real babies. Sure, it may be a controversial statement to the pet-less of the world, but anyone who has had the gift of being loved by an animal knows that the experience is a powerful one.

So, when a pet owner is forced to give up their beloved, things can really get tough. Take Nicole Renae, for instance. When Nicole was just 14-years-old she was made to give her beloved dog, Chloe, up for adoption after learning that her father would be going through a career transition.

In an interview with The Dodo, Nicole recounts the sad time. “He was told we couldn’t have any pets. Chloe was very yappy,” Nicole said. “We had no choice. I was just a kid, so I obviously didn’t have any choice in the matter. It was heartbreaking. I didn’t want to get rid of my dog.”

Perhaps unsurprisingly, the young teen was devastated because she didn’t have much of a choice in the matter. But, just because she had to surrender her pup doesn’t mean that she forgot about Chloe. “As the years went on, I always thought about her. I once called the humane society to try to find out what happened to her, but they couldn’t tell me anything. So, I never knew.”

This heartbreak went on into Nicole’s adulthood until she decided to replace that “missing piece” with a new doggo. After all, she was an adult now with a family of her own.

So, she volunteered to adopt a senior dog–and what happened next was amazing! She ended up with her old dog, Chloe, more than 8 years after she had been surrendered to the humane society!

Predictably, the reunion was an emotional one. “She just kept hugging me. I was crying — it reminded me so much of my Chloe,” Nicole said. “I never thought I’d see my dog again, but I just knew in my heart that it was her.” 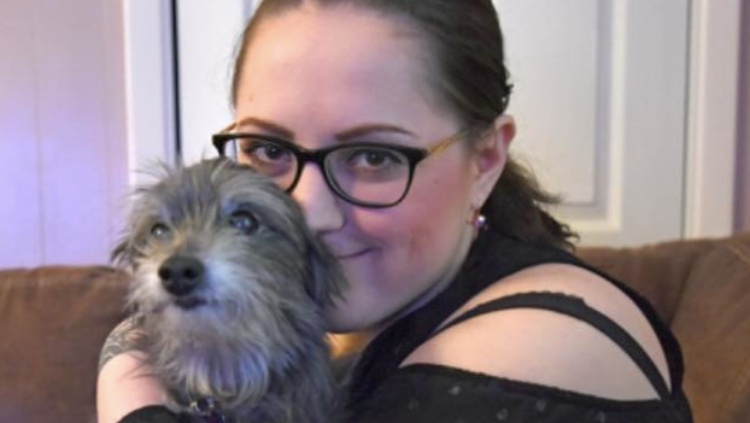 But, the dog owner had to be sure. So, she contacted her old vet’s office and asked them to check this dog’s microchip number against Chloe’s. Sure enough, her premonition was correct! “The numbers were an exact match. It was her,” Nicole said. “I literally felt like I’d won the lottery. It was just the best feeling. I thought I’d never see her again.”

She DOES have her back, though. And, now, the doggy is just another member of the family!

“I’m so happy to have her back. I get so excited to come home from work to see her each day,” Nicole said. “This is just the best thing.”

How’s that for an incredible reunion. We hope that these two can enjoy many more years to come!

We can’t wait to hear your take on this amazing reunion. Are you surprised by this coincidence? Has something similar ever happened to you? Have you ever had to give a pet up for adoption?