Ishu and Laura Rao were married about eight months when the home they built together burned down to the ground. It was just recently, during the wildfires that occurred in Goleta, California earlier this month.

The fires had burned through more than 100 acres and destroyed several homes, the Rao’s home included, before it was contained, with many having to be evacuated from their homes.

Not too long after they lost their home and everything in it, they went back to the rubble of their home in search of one of their most prized possessions: Laura’s wedding ring and band.

Each night, Laura removes her rings to sleep, and it was right around that time when the fire erupted. They had only minutes to get out of their house along with their two daughters, ages 12 and 14, plus their three dogs and one cat—so it’s understandable she didn’t think to grab her rings.

However, having been married just under a year, of course the thought of losing the sentimental piece of jewelry was devastating for the two.

At the site of the burnt-down home, it seemed like an impossible task: to find a ring amid ashes and ashes. But Ishu struck gold—literally. 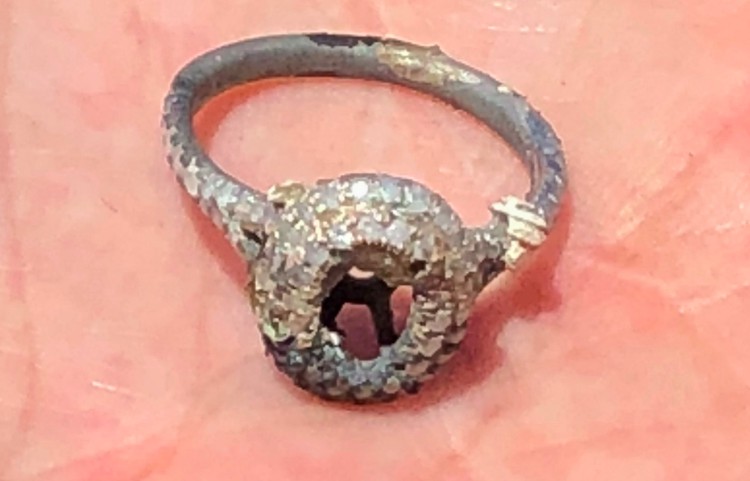 After carefully determining where the pipes for the kitchen sink were among the ash, he found his wife’s rings, just where she left them. They were a little charred, but they were there.

It was in that instant when Ishu knew he wanted to make this a moment the two would never forget. He got down on one knee and proposed to his wife for the second time.

“She’s the most beautiful woman I’ve ever known, she’s the glue in our family, and I adore her to pieces, so if I can put a smile on her face I’m going to do it,” Ishu said.

Our hearts! Can you imagine how Laura must have felt in this moment? Of course she was blown away by her husband, and we’re sure she fell in love with him all over again in that moment among what was left of their home.

She said that the proposal really helped her to focus on what was truly important in life. “It put everything into perspective,” she said. “It took all the pain away and reminded me of what matters in life: the people around you.”

“It was truly a special moment out of the ashes,” said Mike Eliason, a spokesman for the Santa Barbara County Fire Department, who witnessed the entire thing and shared it on Twitter.

“Having lost their Fairview Ave home of 3 years Friday night, Ishu and Laura Rao returned w Santa Barbara Co Fire to let Laura search for her wedding ring. She found the damaged Tiffany ring & Ishu promptly dropped to a knee and asked her to marry him again,” the post said.

Oh and if you’re wondering? She said yes, of course!

To hear more of this bittersweet story, check out the video below!

How romantic is this story? What would you do if you lost your wedding rings and band in a fire?