Gender reveal parties are a cute idea that have really gained traction in recent years, and for good reason; it’s hard to deny the power of watching a parent or parents learn the gender of their baby in front of all of their loved ones!

Though the grand reveal aspect of the parties can vary in creativity, all of the ones we’ve witnessed have been equally as unique and exciting. Case in point is this particular party, where a soon-to-be mom and dad were met with a special reminder when they opened a mysterious box that held what they assumed were either pink or blue balloons.

Lucky for us, this heartwarming moment was captured and uploaded to YouTube. It shows how friends and family of the expectant parents were able to tastefully memorialize three special babies who, sadly, did not make it into the world.

You see, this couple, Angela and Levall from Dallas, had been affected by three late-term miscarriages, two being their children and one being their nephew.

The good folks behind this party were well-aware of the fact that these tragedies made this specific pregnancy so important, so they decided that it would only be right to include mentions of the little angels in the reveal. They prepared a box filled with three white balloons, including a note attached to the strings, and waited in anticipation for it to be opened.

The uploader of this video and one of the planners of the party, Tiniki Thomas, wrote some background on the soon-to-be parents in the comments section of the video. She said:

this family at the time had dealt with 3 miscarriages late in pregnancy, 2 with the couple and 1 with the sister. it took a lot to get them where they where that day. so emotions where at a all time high. they expected the box but we decided to put a twist to it with the balloon mommy reveal while letting them know the other babies have not been forgotten. (sic)

As predicted, the husband, wife, and guests wiped away quite a few tears once they realized what the white balloons were meant to symbolize. After several rounds of prompting, the expectant dad read the note out loud. It said:

These three balloons represent Jaden, Joel, and nephew David, which we all know are running around in Heaven. Even though they seem so far apart, they will always have a special place in our hearts. 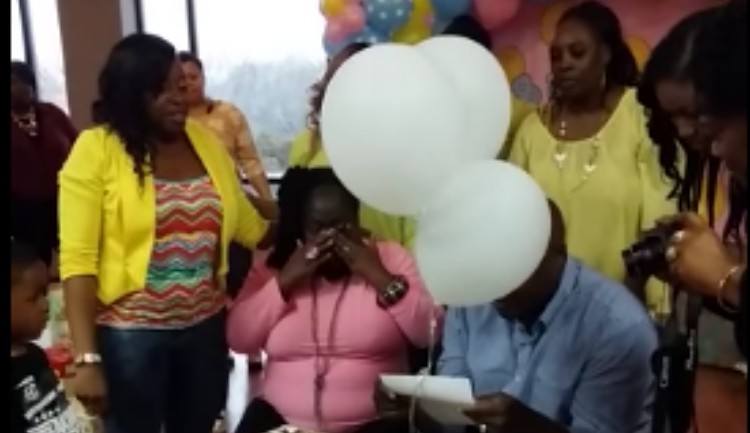 Tiniki Thomas
Yep, we are crying right now over this sweet gesture, too! To watch the full version, be sure to click on the video below. It’s also worth mentioning that the real reveal is included at the end. You’ve just got to see how happy this mom is once she learns the sex of her baby!

What do you think of this unexpected gender reveal? Have you ever seen something similar done before? If so, how did the parent(s) react? Tell us all about your thoughts and experiences in the comments section below!