There’s nothing like playing in the snow when you’re a child—building a snowman, making snow angels, and perhaps my personal favorite when I was younger: Building (and hiding out in) a snow fort.

A snow fort can be as small or grand as you’d like, but the point of it is to be a structure you can actually go in and out of, completely built out of the white stuff. Playing in a snow fort makes you feel like you’re a magical, igloo-living Eskimo.

After a recent snow storm, one dad from Ohio, Greg Eichhorn, who lives in Ohio with his and nine children (eight of who are adopted and have special needs), decided that he had to make some kind of snow fort that everyone could enjoy—including two of his children who are bound to wheelchairs. He wanted them to be able to play safely in it, but still have fun.

Eichhhorn and his sister spent about five hours constructing a snow fort with a wide entrance in it, big enough to wheel a wheelchair through it. And the kids absolutely loved it!

As they played, one of Eichhorn’s friends snapped a photo and loved it so much that he posted the photo to Reddit. It showed one Eichhorn’s daughters in a wheelchair playing in it with a huge smile on her face on. 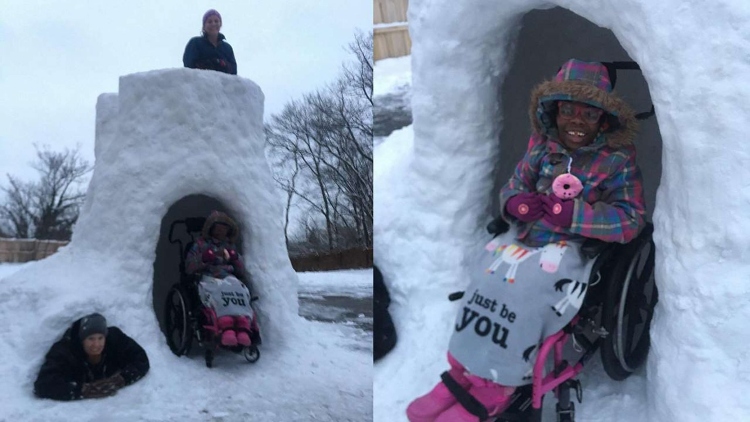 The post quickly went viral. People from all over praised Eichhorn, from calling him everything from an A+ dad to even a hero.

“Honestly just seeing that smile on her face moved me to tears. It’s just pure raw joy. Gregg and his wife are the kind of people that I try to think about when humanity does dumb stuff,” someone posted.

“Handicapped kids hardly get adopted because of their handicaps. This guy could have had any kid he wanted and he chose this little girl in a wheelchair. Truly an amazing person,” another person wrote.

But Eichhorn was modest. “It didn’t feel like a big deal—all of our kids, since they came from different places, we love adoption and kids with special needs, that kind of stuff,” he said. “The thing that matters least is genetics.”

Are there any other kids on the way to the Eichhorn family? Eichhorn says his family feels complete right now, but hopes the post going viral will encourage other to do something about all of the special needs kids who haven’t been adopted yet.

“Our family is getting kind of full and it would be great if people stepped up, took on the same roles and enjoyed the kind of joy that we do. Because yeah, we get a lot of joy out of life,” Eichhorn said.

To hear from Eichhorn himself and see more of the fort, check out the video below!

What a great idea Eichhorn had! What do you think of this handicapped-accessible fort? What was your favorite way to play in the snow when you were a kid?