Anyone knows that when you’re trying to lose weight, weighing yourself on the scale can be a real downer. Even after working out and eating right, how is it that you’ve only lost one measly pound?

You step off the scale totally discouraged and then go eat a donut because what difference does it make? You’re never going to lose the weight you want to lose!

Here’s the thing: The scale sucks. Sorry to the scale lovers out there, but it’s true. It’s not an accurate depiction of how you look and feel, it’s literally just a number. And that number can’t tell you how much work you’ve been putting into your health.

One fitness blogger named and mother of four, Adrienne Osuna, started her fitness journey back in 2014 and was constantly frustrated by the number she saw on the scale, no matter how much she tried to lose weight.

But recently, she realized something: Why did she care so much about what that silly number said?

“For the first time in forever I can say… I DONT CARE about the scale!” she said. “I spent all 2015 frustrated trying to get out of the 180’s. I would literally get so mad at the scale I’d blow that whole day with my food and have a mini binging attitude.”

She went on to recount all of the hard work that she put into her journey to lose weight. “I stopped weight watchers because they focus on the scale, I do flexible dieting, I eat what I want (very low sugar for health), I eat 1763 calories a day, count my macros to hit those goals, (110 carbs 110 protein 98 fat because that’s what I FEEL best on),” she explained. “But I don’t freak out if I have an off day because I’m still in the gym almost everyday working hard.” 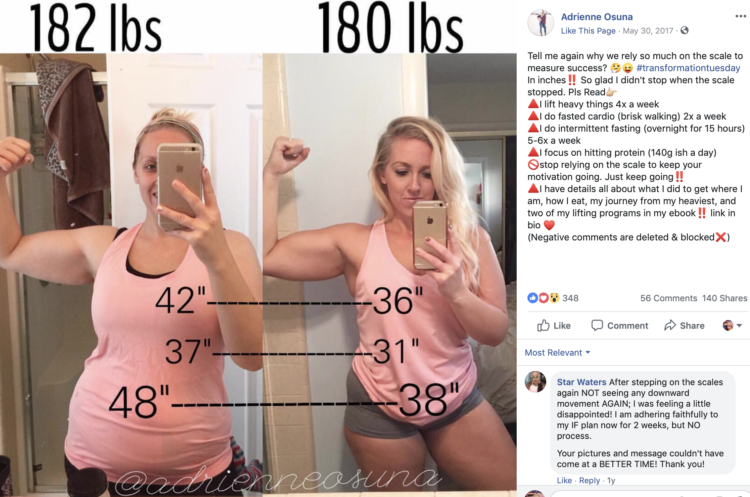 Her epiphany: “I finally realized, am I trying to lose WEIGHT or lose FAT?”

They say that muscle ways more than weight, which is true. So if you’re gaining muscle and looking better than you used to, the scale probably isn’t going to capture that. It’s going to tell you that you haven’t lost very much weight, even if you’ve slimmed down all over.

She posted the above photo to her Facebook, which shows how much the scale can’t tell you. The photo shows her on the left side at 182 pounds, and just two pounds less on the right side, but a whole lot more in shape.

“It is possible to weigh almost the exact same, and have a completely different shape and be several sizes smaller,” she says. “It’s muscle weight, which is more dense and smaller, versus fat weight, which takes up more space.”

“Don’t let the scale discourage you if you’ve been working hard,” she says.

What do you think of the no-scale philosophy? When you try to lose weight, do you ditch the scale and focus on how you look and feel, or want to hit a certain number?