Mom Issues Warning About Popcorn After Her Son’s Terrifying Experience

When you’re a parent, you worry that your toddler might fall and hurt themselves, or that they’ll be bullied in school. But sometimes bad things happen that weren’t even originally a thought in your mind.

Nicole Goddard, a mom of three, was enjoying a family night that involved a movie and popcorn. A pretty standard night for them, more things usually go right during family movie nights than wrong. However, this particular day would change a lot for Goddard, and for one of her sons, Nash.

As the three-year-old was chewing on some popcorn, he began to choke. It was a pretty scary moment for Goddard; however, once he was able to swallow and catch his breath, he was okay.

“He seemed completely fine and continued to watch the movie,” Goddard posted in a now viral Facebook post. “The only thing we observed was a cough he developed after the episode.”

She said the next day Nash was fine, but was still coughing a bit. Though she was a little concerned about it, she assumed he was probably just catching a cold.

Well, the next day brought on even more agony. “As the evening came I noticed Nash felt warm and he was super fussy,” Goddard wrote. “He had a fever, so I gave him Motrin and put him to bed. A very long night with him and then his breathing looked a little labored to me and he just didn’t feel good.”

She decided to bring him to the pediatrician, who performed a chest x-ray. The doctor definitely noticed something wrong, and said that Nash would have to go in for a bronchoscopy than evening. 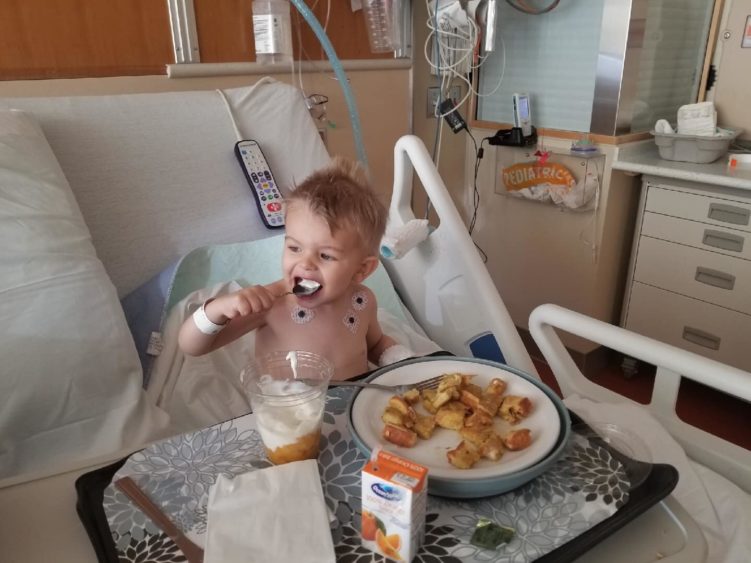 It turns out that Nash never swallowed that piece of popcorn he choked on—he aspirated it into his lungs. “The body recognized it as a foreign object and put puss pockets around it,” Goddard said. “All the inflammation caused him to develop pneumonia in his left lung.”

During the bronchoscopy, the doctor was able to remove six whole pieces of popcorn from his lungs. “There was so much inflammation so the doctor wasn’t 100 he got it all so scheduled him to be admitted and repeat the procedure in 2 days,” Goddard said. “It was a an up and down roller coaster but we were in the best care.”

“If I wouldn’t have trusted my instinct and brought him in, the outcome wouldn’t have been good,” Goddard says. “We’re so thankful our little man came out ok. All of this over popcorn which is eaten on a regular basis in our home.”

That said, the doctor did warn that children under 5-years-old shouldn’t be eating popcorn. With Nash being her third child, two of whom she’d given plenty of popcorn to, she didn’t see it as hazardous and wanted to warn other parents.

You can read the whole story on Goddard’s post here.

We’re so glad Nash was okay in the end! What are your thoughts on giving popcorn to youngsters? Did you have any idea something like this could happen?