While Enjoying A Meal With His Young Daughter, A Waitress Brought This Note To Him

Being a single dad is no easy task. Heck, being a single parent at all is one of the hardest things someone will ever have to go through!

Is someone watching you in the aisle of the grocery store and judging you when you let your kids dig into the bag of chips before paying for it? You just never know how you’re actually doing until you get some reassurance.

One single dad was having these thoughts, but got the encouragement he needed to let him know he was going a good job. It was Valentine’s Day, and he decided to take his 6-year-old daughter out to special dinner for a little father/daughter date.

He was just out enjoying his time with his little one when his waitress dropped a note at their table during their meal.

When he read it, he was absolutely shocked—and tearful—at what it said.

Sorry to spy, but my husband and I saw you out with your little date and were so impressed with what a great Dad you are.

From two adults who grew up without dads, it’s so important to have a male role model at a young age.

Keep up the good work Dad!

Dinner is on us!” 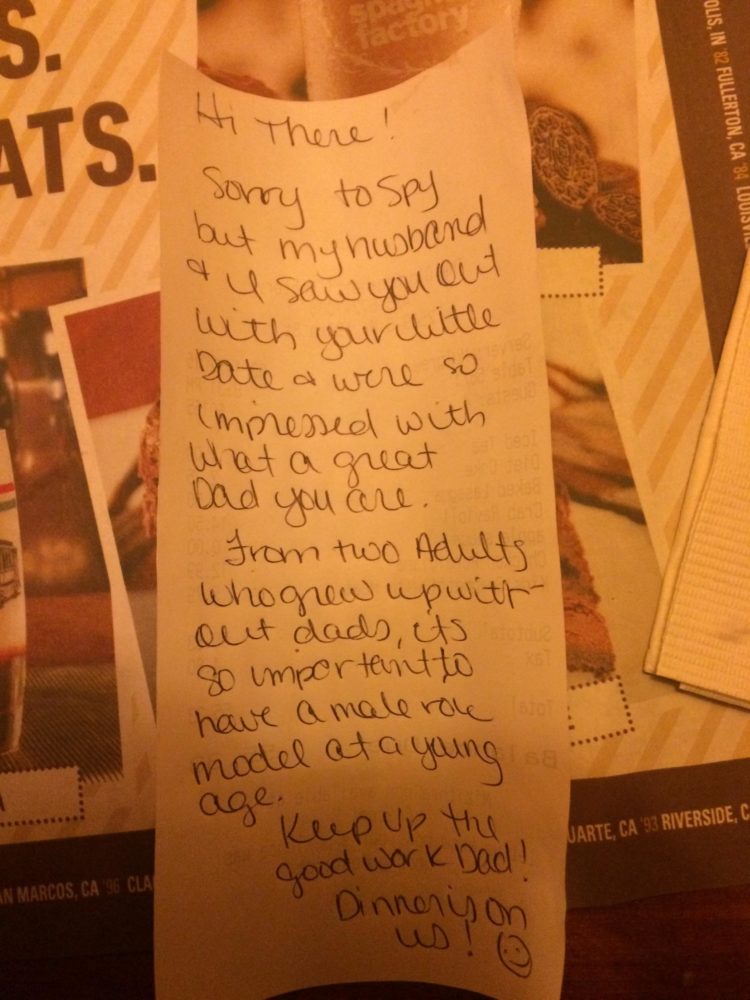 We love a good act of kindness, and this one touches our hearts so much. Imagine you’re a single parent and receive something like this?

The dad was so taken aback by the note and nearly lost it in front of his daughter at the table. When he got home that night, he posted the note on Imgur and wrote:

“As a single dad, I took my six year old daughter out to Valentine’s Dinner tonight when this happened. I won’t lie, I teared up at the table. So, thank you random strangers. Thank you.”

While he didn’t have a chance to thank the couple who paid it forward in person, it was clear it touched him. And by simply by posting the note, the act of kindness went viral.

The post was swarmed with hundreds of comments praising the dad for all sorts of reasons.

Some people reminisced about how they used to spend Valentine’s Day with their own father. “My dad would get me a single red rose every year for valentines. I always really treasured that gesture,” one woman wrote.

“This made me tear reading it, because my son’s father barely comes to see him anymore. It makes me happy to know men like you exist,” someone else wrote.

Others just praised the dad for doing the single thing, and being awesome at it.

“What you are doing matters, please continue being an awesome dad to your little girl,” someone wrote.

Do you know a single parent just trying to do right by their kid or kids? Have you ever done something like this to praise their good deeds?