Vet Gets a Sweet ‘Thank You’ After Freeing a Chained Horse

That’s the picture we get when we think “horse.” But in Romania, they’re limited to roam freely like this.

While in America this likely would never fly, in Romania, it’s a common practice to chain a horse down through its front or hind legs in order to keep them from running away.

“These horses were first brought to Romania around 300 to 400 years ago by the Tatars,” Animal Channel explains. “The Tatars left many horses behind, and they started roaming freely through the area. Many horses were also set free in 1989, after the agricultural cooperatives in the area broke apart. This led to a huge population boom—by 2010, there were as many as 1,500 horses living in the Danube Delta.”

The outcome of this? “Environmentalists and authorities in the area needed to control the horse population, so they decided to kill the horses.”

“Unfortunately, in our country, the punishments are not hard enough for the ones who torture animals,” one person wrote on social media in response to the video. “Thank you for helping the animals that can’t defend themselves against cruel humans.”

We think that sums it up perfectly! 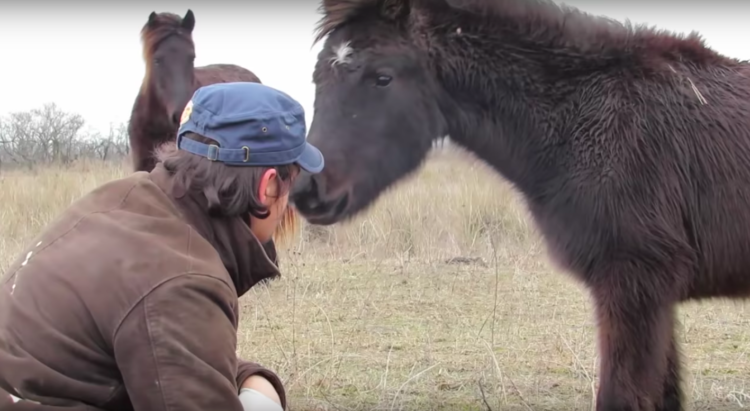 Thankfully, one organization called Four Paws International has stepped in and has been working to find other less unfortunate ways to control birth rates of horses without having to take such drastic measures, such as contraceptives.

Due to their efforts, in 2017, there were less than 500 horses in the Letea Forest, which is less than there had been in the past.

Ovidiu Rosu, a vet with Four Paws, can’t bear to see horses chained up like this. He knows that the chains can cause cuts and injuries to the animals that have to suffer through that. And when he recently saw a horse with its legs bound, he knew he had to take matters into his own hands.

After sedating a horse, he cut off the bindings, revealing what he expected: that they cut into his legs, causing him to bleed.

It’s true—animals understand human emotions just as much, if not more so than humans do. That was made apparent after what happened when the horse woke up.

After Rosu got the bindings off, as the horse was recovering, another horse when up to Rosu and thanked him for saving his friend in the sweetest way: He went up to Rosu and touched noses with him!

You’ve got to see the reaction of the horse yourself to believe it. Check it out in the video below!

What do you think of how Romania treats their horses? How sweet was it for this horse to thank the vet like he did? Have you ever encountered a “thank you” that came from an animal before?