As much as people want family bonds and friendships to stand based on the basics like unconditional love and respect, we all know it doesn’t work out like that. But sometimes the oddest things can make them crumble.

In this case, it’s a vegan bride’s choice not to invite family and bridal party members who are meat-eaters. A Reddit user shared a screenshot of the bride’s comment to a Facebook group called “Vegan Revolution.” Her stance was not received well by vegans and non-vegans alike. 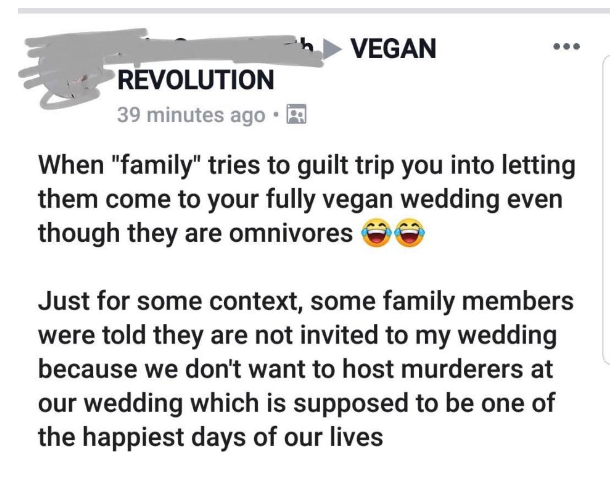 We know there are many different types of bridezillas, but we’re not sure if we’ve ever seen one call her family “murderers” for eating meat. No one really came to her defense, and many vegan commenters on the thread suggested she just serve a vegan menu (one that tastes good) and focus on celebrating their nuptials with people they love.

In light of all the criticism she was receiving for being so extreme, the bride posted a follow-up message on Facebook that said:

“They have consistently attacked me and my partner just for being vegan but when it comes to my wedding, they want to be all buddy buddy with me again. When I broke the news to them, all I got was attacked because I don’t want the weight of having people that still kill animals (the very beings we are trying to protect) at my wedding on my conscience.

I posted in here because I thought I would get some understanding from the people doing the same thing as me. I have tried to educate these people for more than 2 years with no result so I’m not putting up with it at my wedding of all days when they will probably cause problems there too. I’m not sorry if that makes me “rude” or “a b***h” because I am not compromising the ethics that I share with everyone here.”

To be fair, some commenters chimed in to say that their non-veg family and friends often complain about there being no meat at parties, weddings, and other gatherings, and it can get annoying. However, this bride found no support when it came to her having a “superior” attitude, with many vegans saying it gives vegans bad publicity.

Once this story went viral, an unidentified bridesmaid shared that she wished her friend had made her requirements known before she bought her bridesmaid’s dress. She also stated that it sucked to be disinvited because she’s known this woman since childhood.

Redditors pointed out that while the 20-year-old bride and her groom could invite who they wanted, it is sad that she doesn’t want her own parents there on her big day. Further, it’s ignited a discussion online about wedding etiquette, with experts stating that disinviting guests is poor form.

Instead, they recommend sharing the day with loved ones and sharing a menu that is reflective of the couple’s tastes and preferences. If the couple wants, they can include some menu items that accommodate guests, but as we know, every wedding doesn’t have food that tastes good. No matter what the diet is, you won’t please everyone!

What do you think of this bride’s extreme choice to ban non vegans? Your thoughts on fellow vegans disagreeing with her? How would you have handled this issue if you follow a special diet?