We know by now that vaping has skyrocketed in popularity in recent times—from 7 million users in 2011 to 35 million a few years ago. But with vaping being more on the newer side, something we don’t fully understand yet are the long-term risks involved.

Many people, namely teenagers, believe that smoking e-cigarettes is safer than going the traditional cigarette route. Unlike the latter, vaporizing devices heat up a liquid until it turns into an inhalable vapor. The device emits a puff of vapor that’s usually scented. Way better than real smoke, right?

Not really. In recent years, studies have begun to pop up about the dangers of vaping. For example, one major study by researchers from the University of Kansas found that e-cigarettes can increase the risk of heart attack by more than half. Additionally, vaping utilizes flavor cartridges that contain nicotine and other chemicals that have been proven to be harmful, particularly to lung tissue.

In fact, lung issues have become even more apparent after five people have recently died to strange lung illness that experts believe is related to vaping. There are now 450 possible cases of the illness among 33 different states and one territory, health officials recently reported.

There hasn’t been a specific vaping product directly related to the deaths. Victims used a slew of different vaping products: marijuana-based products, marijuana and nicotine products, or only nicotine products. An investigation by the by the Wisconsin and Illinois health departments for what exactly is causing the illness remains under way, with the Food and Drug Administration testing a broad range of chemicals, including nicotine, THC and more.

“Based on the clinical and laboratory evidence to date, we believe that a chemical exposure is likely associated with these illnesses,” said Dana Meaney-Delman, the Incident Manager for the response to the outbreak. 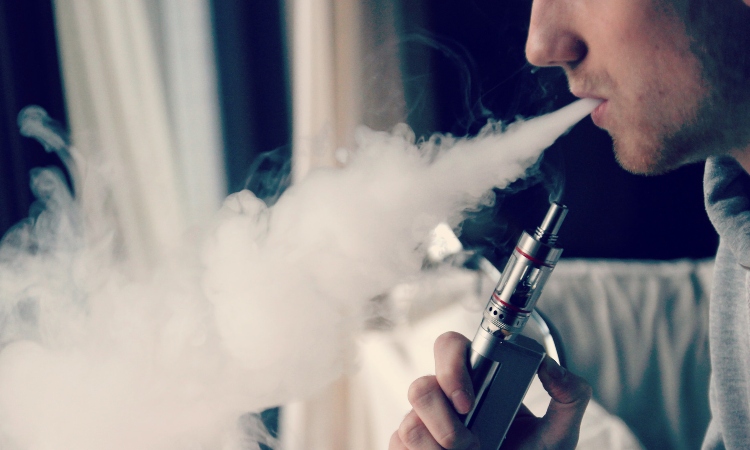 Age ranges for the victims of the vaping-related illness vary, but the people were all otherwise healthy. The one common thread they had: e-cigarette-related products. Symptoms of the illness began with a cough, and continued with chest pain or shortness of breath, which occurred for several days to several weeks before they were eventually hospitalized.

While no conclusions can be made just yet, clinicians were able to pinpoint another common link to some of the patients, one being vitamin E acetate, an oil that has been found in samples of marijuana products collected from those who have become sick. While this oil hasn’t been identified in every single sample, the FDA still issued a warning to avoid inhaling the substance until the investigation is closed.

Another common link to some of the patients: abnormal immune cells in the lungs. “That can occur when either oils or lipid-containing substances enter the lungs,” said Daniel Fox, a pulmonologist and critical care physician at WakeMed Health and Hospitals in North Carolina.

The most important thing is that all the patients vaped, and if you too vape, you may want to put the e-cigarette away until more information is know.

Do you vape? Have you or anyone you know ever experienced any scary symptoms like these?