Here’s a Genius Way to Upcycle Your Old Garage Door!

Do you consider yourself to be a hardcore DIYer? For instance, have you ever taken a good look at your old garage door and seen a dining room table? We know, the idea itself seems a bit far-fetched, but the end result is so impressive and, dare we say, classy!

Instructables user jmitch77 chronicled his unique approach to transforming his garage door into a table.

Jmitch77 describes himself as an artist that works as an engineer. He goes on to say that he likes to combine the two fields in his projects. His passion and skill set are certainly evident in his execution of this project.

The engineer knew that he wanted to upcycle his garage door so that he could once again make it useful for him and his family. His first step was to start laying out some practical designs.

jmitch77
Next, it was time to get to the slicing and dicing!  Jmitch77 separated the horizontal panels, then sanded them down. He went on to round out some of the sharp pieces of wood and remove the rotten areas. 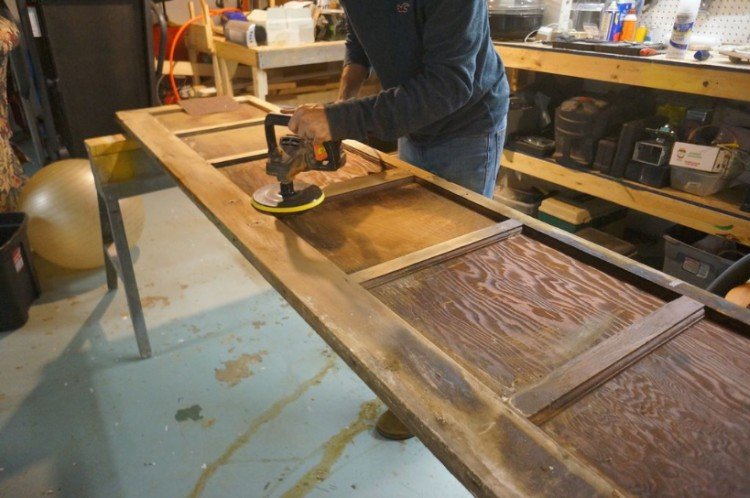 jmitch77
After all parts of the wood were smoothed out and ready to be worked with once again, he began working on the legs. The remarkable DIYer even added torched accents to help add a “worn” aesthetic look to his new table. 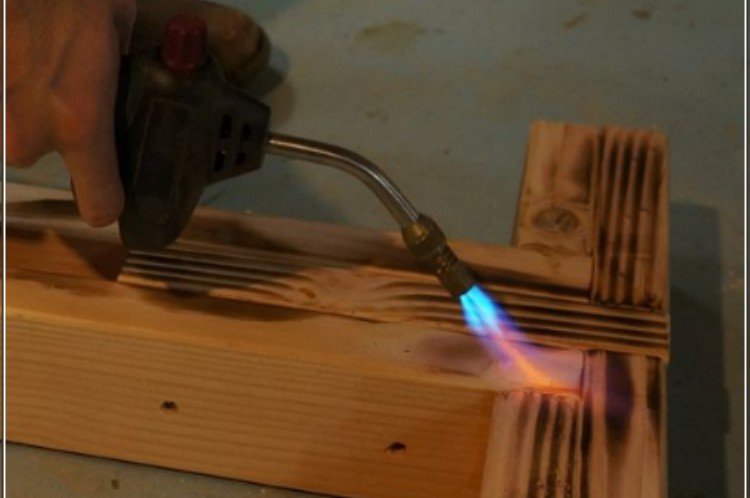 jmitch77
Once all parts of the legs were completed, he moved on to build some much-needed reinforcement. This part was needed to help support the underside of the table. The grid design gives the table a heavy-duty structural base that it didn’t have before. 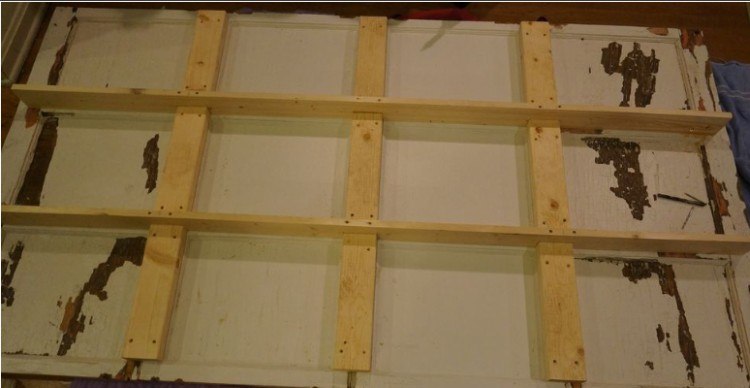 It was then time to attach those nifty legs that he had created. Jmitch77 used fasteners and screws to help them stay properly secured. 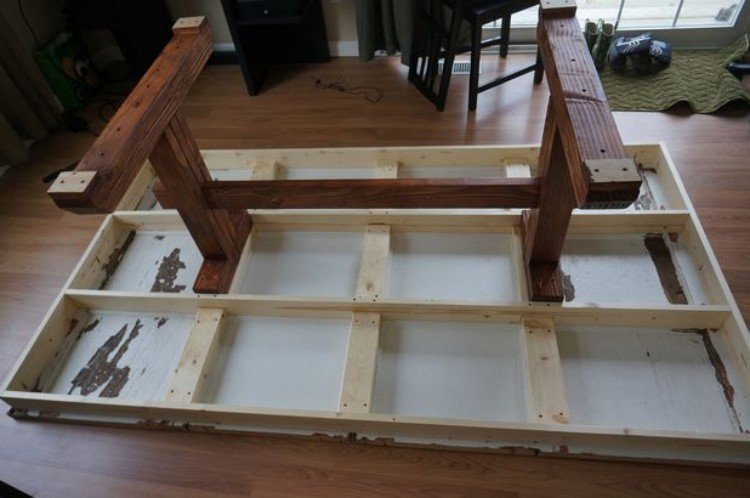 jmitch77
He then started in on his sealing process with three coats of polyurethane. 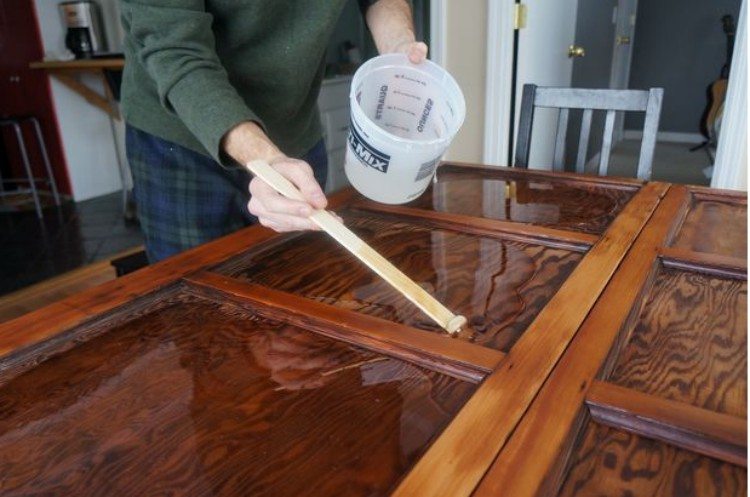 jmitch77
Jmitch77 says that the most important (and stressful) part of the build was adding epoxy to the new table. He writes that this step made his “anxiety levels elevated.”

The epoxy pour ended up being especially tricky because he had to introduce large amounts of the substance into the table’s pockets without allowing any air bubbles to form.

Jmitch77 did some research and realized that this problem could be combated by using a blowtorch. It sounds a bit much, but he swears that this fiery tool is an air bubble’s “worst enemy!” 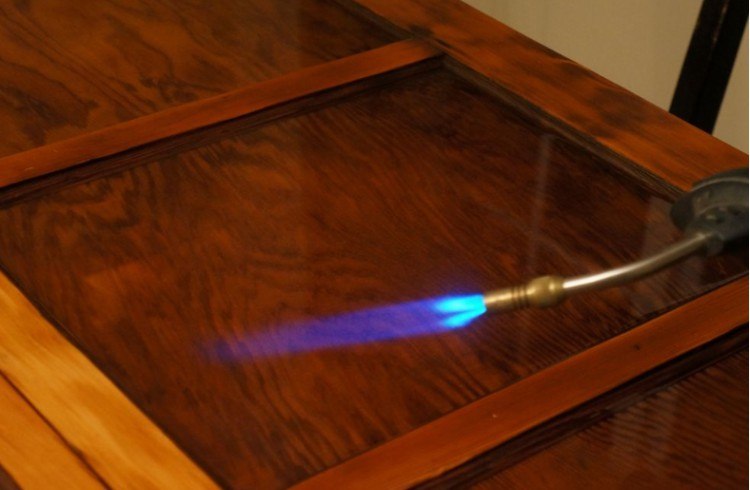 The process was completed with one final pour of epoxy over the entire table. This was done so that all of the ridged pockets would end up being the same size. 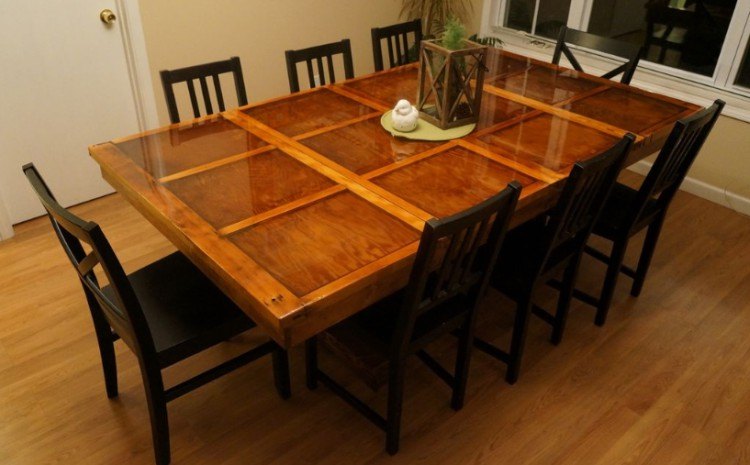 We’re guessing that you’re as obsessed with this repurposed table as we are! This one of a kind piece would look chic in any dining room.

We are happy to report that, at the end of the day, jmitch77 loves his new table. He leaves us with an inspiring message.

Overall it turned out beautifully in my opinion even though it didn’t have the look I was going for initially.  I hope it inspired you to go out and use, reuse and upcycle items to make beautiful furniture yourself!  The less we throw away the better it is for everyone!

Have you ever repurposed a garage door? If so, tell us a bit about the process. We look forward to hearing all about it in the comments section below!