Do You See the Totally Unusual Thing About This Restaurant Receipt?

Finally, a good challenge to come out of the Internet! We’ve seen way too many bad ones—from the recent Fire Challenge to the Tide Pod Challenge and everything in between.

Now? We have the #TipTheBill Challenge, which erupted back in March but is recently gaining momentum. It’s been making restaurant patrons extra generous, and waiters and waitresses extra grateful.

The #TipTheBill challenge encourages those eating out to tip the entire cost of the bill. Like, 100 percent of the bill. Like, basically doubling your bill and giving that to the person who served you. So if your bill came out to $100, that means your waitress will be walking away with $100 and you’re out $200— yet feeling amazing, since you’re doing such a good deed, mind you!

Why is this so great? Well, the standard tip is 20 percent, and some people tip even less than that. According to Michael Lynn, a tipping expert at Cornell University’s School of Hotel Administration, 40 percent of people aren’t aware that they should be tipping between 15 and 20 percent. And that means, even despite good service, restaurant servers aren’t getting paid what they really deserve.

There’s a lot of controversy about tipping in general. Many people believe that gratuity should be included in the price of whatever they ordered, not to be added on later at their own expense. There actually have been moves made in some restaurants to include tips in the price of the meal. 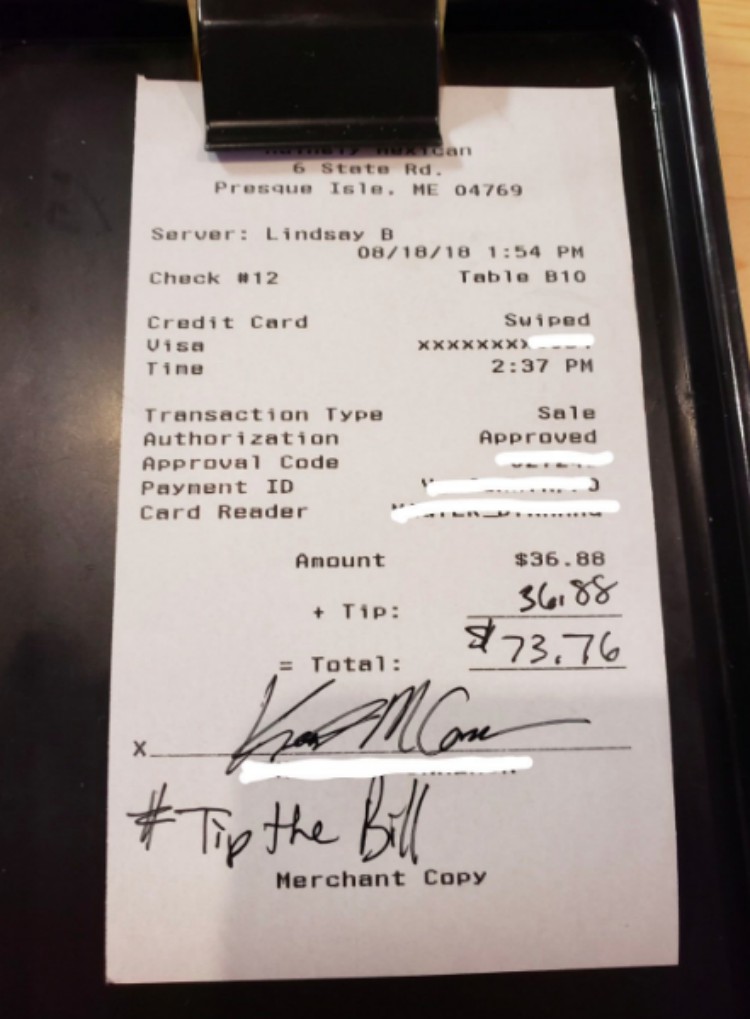 For example, restaurateur Danny Meyer forbid tipping throughout his Union Square Hospitality Group. He believed that tipping was supposed to be a way to praise good service, so he wanted to do that in a different way.

He developed a 5-star rating system, which will influence revenue distribution from the night— and also a way to tell who needs a raise, or who needs to be fired! If the service was absolutely horrendous, Danny encourages customers to talk to a manager and they will deduct from their bill.

Then there are the patrons who just might not be able to afford tipping after already paying for their meal. “They may not have the money, or they have so little money that the alternative uses of it are more important to them than the social approval that comes from tipping,” Lynn says.

Some people think that it’s not their job, or shouldn’t be their job, to tip. There are tons of message boards on Reddit talking about how customers just don’t feel the need to leave extra money for someone they don’t even know.

“If you want more money get a better job,” one Reddit commenter said, with another one proclaiming, “I have absolutely no problem leaving nothing as a tip if I feel that the service didn’t warrant one.”

With so much controversy around the notion of tipping, it’s no surprise that waiters and waitresses get stiffed a lot of the time. That’s why it’s so nice to see people acknowledging good service in the most generous, heartfelt way.

What do you think of #the TipTheBill Challenge? Do you think you’ll ever participate? If you’re a server, have you been the happy victim of a #TipTheBill customer yet? We’re crossing our fingers for you!