This Cat Wandered Into a Bear’s Zoo Enclosure

When you hear the start of this story, you’re going to immediately think it’s going to end in an upsetting way. But, we promise, it has a surprise ending that will make you smile rather than cry! Every morning at the Folsom City Zoo, the zookeepers come out to feed every animal. The black bear in his private, spacious enclosure gets a medley of foods, including a large spread of dog kibble on the ground – apparently, this is one of his favorite treats. But the zookeepers started noticing that someone else was sneaking into the enclosure to share the bears’ dog food.

Never fear, it wasn’t a person creeping into the bear enclosure. It was a black cat, who had found a way into the enclosure and was snacking on the dog food scattered on the ground. The keepers decided, instead of trying to keep the cat out, that they would leave out some food just for him to enjoy. This treatment encouraged the cat to stay put, and he decided to take up a permanent residence inside the black bear enclosure.

Yes, with a huge and terrifying-looking bear.

Needless to say, seeing this shocked guests at the zoo. Whenever they saw the cat hanging out in the enclosure, they would panic, often going to get zoo staff to let them know. You would too, right? When you see a regular house cat hanging out dangerously close to a bear – an animal we consider wild and oftentimes dangerous – your immediate fear would be that the bear would eat the poor kitty. Time and time again, the keepers would tell the frantic guests that they didn’t have anything to worry about; the cat was ALWAYS there, and he got along well with the bear. 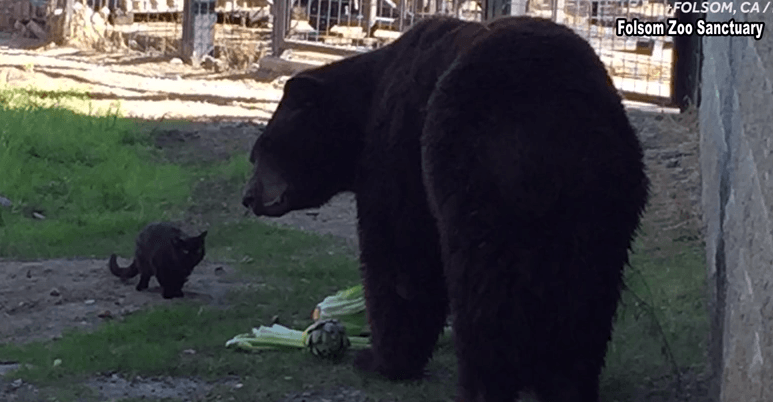 Humankind
As silly as that sounds, it’s true! The cat didn’t avoid the bear, named Little Bear, in order to live in the enclosure – it became apparent that the two were living together. It even seemed like they LIKED each other.

The two animals are always lounging around together, eating dog food together, and even cuddling, on occasion. Considering their fantastic relationship, the zoo hasn’t made any moves to remove the cat from the enclosure, despite guests confusion and concern. They even named the cat, Sequoia.

Despite their relationship seeming unlikely, Sequoia and Little Bear turned out to be the perfect roommates for one another. Both animals are on the older side, both love lounging in the shade, and both enjoy each other’s company. Even though their size wouldn’t let onto it, this strange duo have quickly become the best of companions.

This adorable story is a great example for us all to live by! It just goes to show, no matter how different we are (or how different we THINK we are) there is always a way to get along and live with one another in peace.

What do you think of this story? Does this unlikely friendship surprise you? Share your thoughts in the comments section below.