Unique Ballet Will Astound You

On its own, a ballet performance can be mesmerizing. Strength, grace, and balance define the movements of these dancers. It has much in common with another form of performance art: acrobatics.

Blended together, it’s an extraordinary sight to behold. In this video, you get to lay eyes on a performance by a pair of dancers from the Guangdong Acrobatic Troupe. Their elegant version of the traditional pas de deux – a ballet duet – is a combination of Chinese acrobatics and dance.

As the music begins, Wu Zhengdan is squatting on her partner Wei Baohua’s back. He is also crouching! Both have their arms outstretched and flowing like wings. Wu then stands up and begins doing pointe on Wei’s back. Watch that stance!

The audience is hypnotized by their routine. She steps up into his hand and is standing on one foot and then flexes into a vertical split. Did you see that? Wu does more gravity-defying acrobatics like a handstand in Wei’s hands before descending back to the floor. 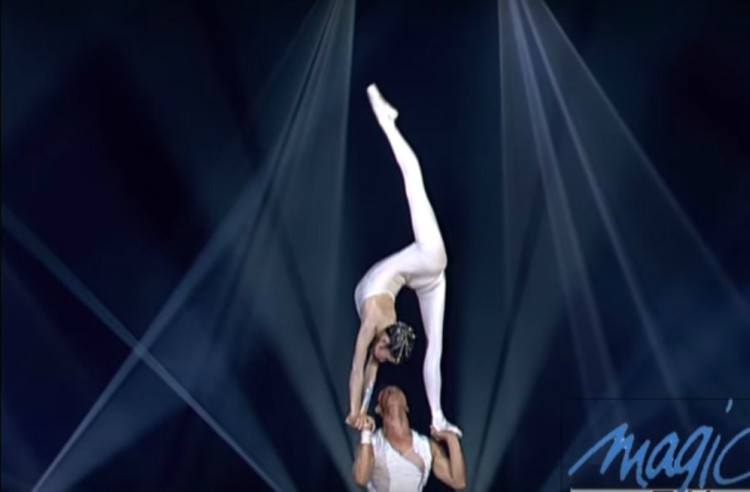 Patrick Sébastien
Dancing in each other’s arms, they move magically across the stage and then Wu lies down on the floor. They extend their arms out to each other and you may expect to see a sweeping move, but no. Wei lifts Wu up onto her hands, and with their palms together, she’s floating in a handstand. And then she flips into balance on his palms – on her feet! Unbelievable.

To accomplish such synchronized feats, there has to be a lot of trust between dance partners. For Wu and Wei, it began when they were children attending the same gymnastics school. During that time they trained together and won international awards in acrobatics. After leaving school, they paired up and joined the Guangdong troupe.

It was there, under the leadership of a choreographer, that they began to learn dance. They had a natural gift for ballet and soon incorporated it into their performances. Traveling around the world, Wei and Wu have captivated audiences with shows like this pas de deux and Swan Lake.

Over the years their talent has not only captured the hearts of audiences, but one another’s. They have been married since 2003. Watch the video closely and you’ll see more than two people dancing beautifully. There’s an added air of harmony, and it’s easy to deduce that some of that has to come from their loving bond.

In between ooo’s and ah’s, it’s hard not to admire their physical strength and dexterity. Just look at the faces in the audience. And though this clip is full of jaw-dropping moments, one of the best comes around the five-minute mark. Superhuman is the term that comes to mind. Others have called their act “the impossible.”

Enjoy watching this entire routine and we dare you not to be amazed. So much is required mentally and physically for performers like Wu and Wei to excel in this field. Chances are you’ll be hard-pressed not to be impressed.

What are your thoughts on this stunning performance? If it exists, name a time when you’ve seen movement like this before.