Hair Dresser Mom Helps Her Daughter Get the Hair of Her Dreams. Now She’s Defending Her Decisions to Furious Online Critics.

Mary Thomaston via Inside Edition

If you’re a parent of a young kid, then you know that, sooner or later, your little one will come up to you asking for something that you will think that they are “too young” to do. Whether it’s getting a belly button piercing, a tattoo, or even wearing a skirt that’s just a tad too short, battling with children over their appearances is just a normal part of parenting.

And while some moms and dads only want to see their offspring sporting clean-cut looks, others don’t see the harm in letting their young’uns express themselves. Take Mary Thomaston, for instance. The hairstylist and mom decided to indulge her 6-year-old daughter Lyra when the little girl requested a rather bold hair makeover.

Now, when we say “bold”, we mean BOLD! Believe it or not, Lyra asked her mom to give her a unicorn-inspired cut and color job, complete with blue, yellow, and purple locks.

The youngster’s reasoning for switching up her hair ‘do was simple—she just wanted to try something different! “I didn’t really want the dark blonde anymore so I decided to color it,” the 6-year-old explained to Inside Edition. We totally get you, girl. Adding a touch of color can be fun!

If you think about it, it’s not entirely surprising that the tyke would ask for such a daring change. After all, her mother is pretty much “Instagram famous” for performing these rainbow-colored dye jobs on her clients. 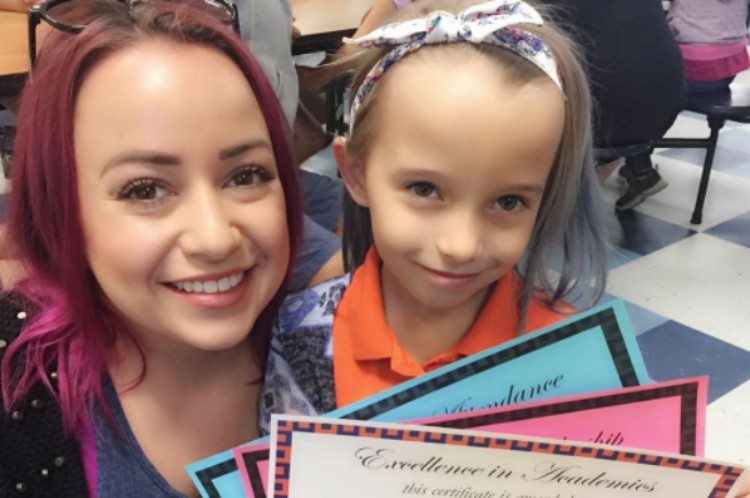 “I’ve been doing hair for a while, and I’m always doing fun, colorful hair,” Lyra’s mom explains. “She [Lyra] sees it all the time—and I have it myself—so of course she’s going to want it.” Makes sense!

Believe it or not, the “cool mom” actually honored her daughter’s request and got to work on giving the sweet girl the hair of her dreams. To create Lyra’s technicolor hairdo, the stylist used non-toxic, temporary dye that could wash out easily.

It goes without saying that Lyra’s multi-colored mop is most definitely a conversation starter. Since the 6-year-old’s cut and dye job has gone viral, plenty of folks are going gaga over the look. And while most are completely supportive of the girl’s unicorn mane, an entire legion of hair color naysayers has, not surprisingly, come out of the woodwork.

Luckily, Lyra’s mom refuses to read the comments on her daughter’s photos, choosing to focus on the positives that have come from the experience. On top of getting a whole lot of attention, Mary also adds that her daughter’s new hair has helped the first-grader “come out of her shell.”

With all of that being said, we think it’s time for you to see Lyra’s controversial hair color so you can judge for yourself. Just click on the video below to hear Lyra’s talented mom defend her first-grader’s look. No matter what side of the argument you stand on, you’ve gotta admit that this girl looks pretty darn cute!

What do you think of little Lyra’s unique hair color? Do you agree or disagree with her mother letting her dye her hair? How old were your kids when you first allowed them to color their hair? Tell us all about your thoughts and experiences in the comments section below!