These Bears Decided to Take a Dip in Lake Tahoe

When you go to the lake for the day you expect to see the sun, the surf, the kids playing. What you don’t expect to see is a family of bears playing in the water like the human families around them! Everyone who visited Lake Tahoe on this particular day was shocked that a family of bears – with one mama bear and her two babies – wadded into the water and started to splash around! Luckily, one quick visitor caught the whole thing on tape.

The video starts on the mama bear and her two cubs in the water. It looks, at first, like they’re washing themselves off. Then the kids start to horse around! One of the little cubs jumps on the other’s back, which he doesn’t particularly like. He pushes back on his brother or sister, who goes flying backwards through the water.

While the cubs play, the mama bear doesn’t seem to want to do anything. As the girls in the background of the video note, she seems to just be hanging out in the water, clearly enjoying the weather and the relaxing waves. Considering how much energy her kids have, she’s probably exhausted and needs a little time off! Think about that: bears don’t have baby sitters. Or school. They’re with their cubs 24/7…until they send them off into the wild to fend for themselves, of course. 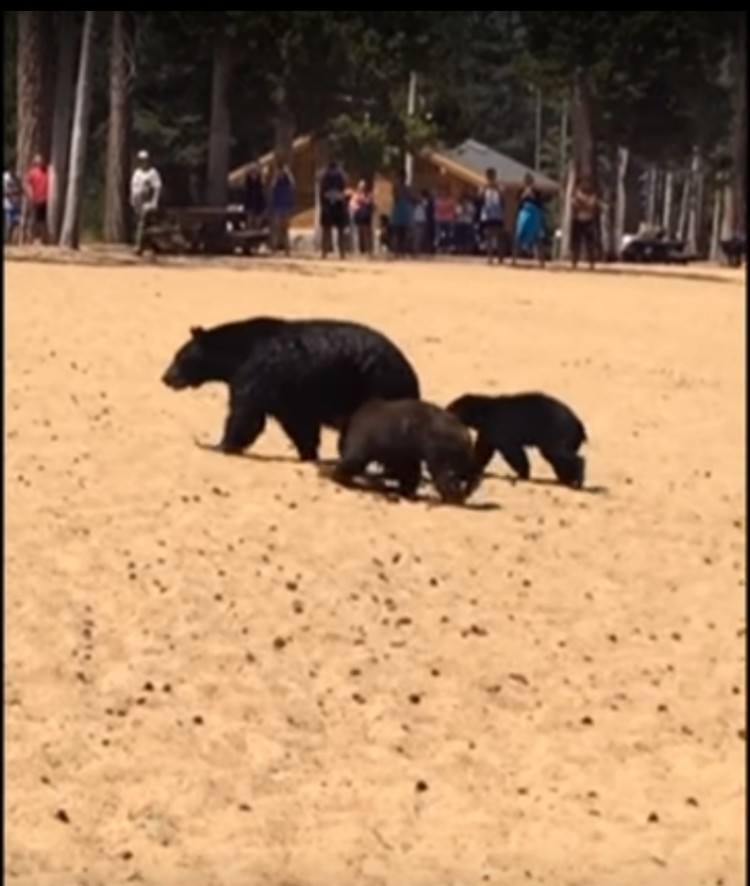 WKYT
One of the cubs, who has distinctively lighter fur, starts to make a break for the shoreline and the video then cuts to the bears on the beach. At first, they seem to be dawdling. The family is sniffing the sand, looking around (probably at the crowds of people who have backed up on both sides of the beach to film them) and even investigating a sand pail.

Then, once the bears determine there’s nothing exciting left to do, they head out. The bears walk up the sandy slope towards, we’re presuming, the woods. We hope they had a fun day at the lake!

This was such a cool thing to catch live on camera! How often does a family of bears just wander into an open lake filled with humans? Seems awfully trusting of those bears, doesn’t it? Then again, they’re black bears, so they are the more gentle variety of their species.

Regardless of that fact, we can’t help but wonder how people reacted when the bears came strolling down the sand into the water. I mean, if you saw a bear strolling toward you, what would you do? Cry and swim away, maybe? But no matter the reaction, the bears clearly weren’t phased! They enjoyed their time at the lake like everyone else.

It is pretty funny though, when they’re in the water, to see the people behind the bears just hanging out. People are drifting on paddle boards and just kind of swimming around normally, like it’s not a weird thing that a family of brown bears is sharing the water with them. The second reaction, of everyone spreading out when the bears hit the sand, is more what we would expect.

What do you think of these hilarious bears? Share your thoughts in the comments section below.