Taking a ride with Uber is pretty commonplace these days. Even though you’re trusting that a stranger is going to take you from point A to point B (you know, without murdering you), Uber has actually become one of the best, easiest, cheapest ways to travel.

Even so—when your ride gets to your pick-up destination, you still really don’t know what you’re going to get. Will your driver be nice? Will he talk your ear off? Not talk to you at all? Just be a total weirdo?

We’ve gotten all of these before. And sometimes you’re just not in the mood to be told stories about your driver’s six kids. Then again, sometimes that can be kind of entertaining.

One Uber driver named George Ure decided that instead of assuming what type of driver the rider would walk, he’d create a “menu” so that they could choose. And it’s gone viral because it’s amazing.

Every ride he does, Ure offers his riders a “Ride Type Menu” of options for what kind of driver they’d like him to be. The different rides include “The Stand Up,” “The Silent Ride,” “The Therapy Ride,” “The Creepy Ride,” and the “Rude Ride.” You can see the descriptions for each of them below. 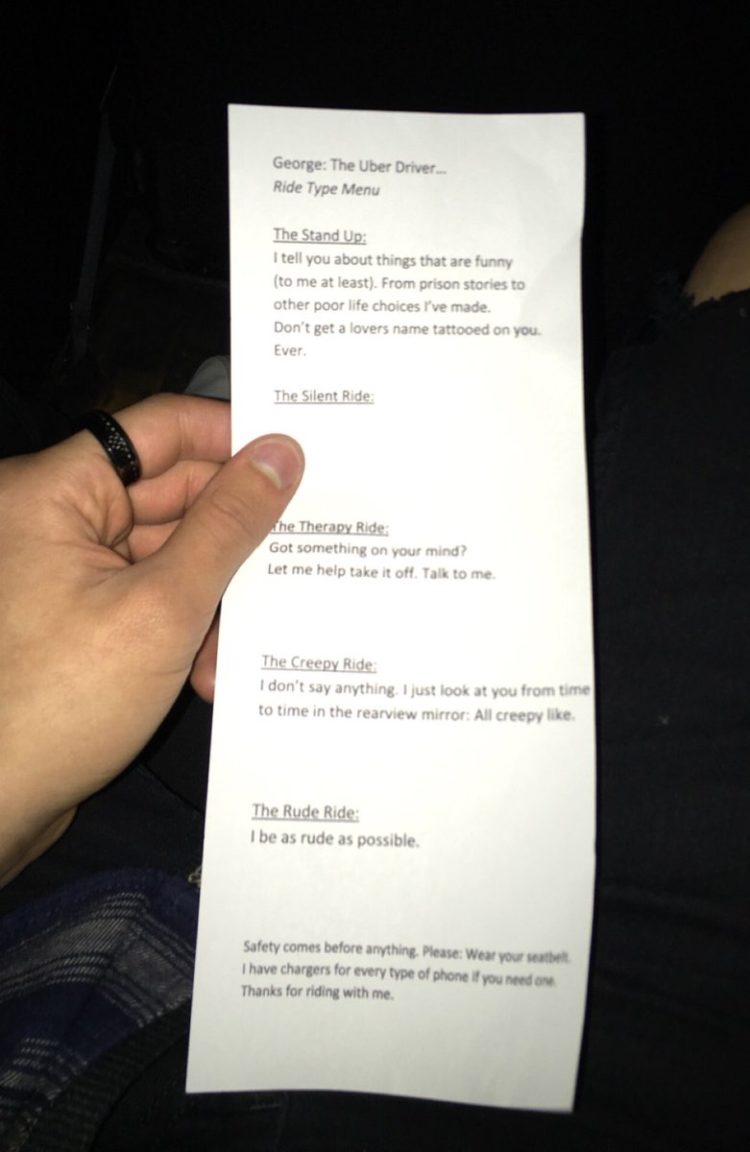 Ure thought of the idea to print actual menus after joking about it with customers before. “People would come in [my car] and I would be like, ‘Gosh, I should make a menu,'” he said. “It’s one of those jokes that was like, ‘Holy sh*t, that’s a really good idea.'”

He even sought advice from a friend whose a chef about how to lay out the menu professionally. He printed about 20 copies of it and then put them in the backseat for his riders to pick up during their rides.

So what if a rider doesn’t ask for a specific ride? “Those people by default are a silent ride,” he joked.”If you don’t want to talk, that’s cool — I have social skills.”

In all seriousness, Ure really does want to give his riders a good experience. “We could tell that he really cared about his passengers’ satisfaction and we respected him because that’s never happened to us,” said Luis Arguijo, who was the person to tweet Ure’s menu and make it go viral.

While we’d totally go with the Therapy Ride (because who couldn’t use more life advice?)—or even the Rude Ride to see what that’s all about—Ure says most people go with the Silent Ride and the Stand Up.

He personally enjoys the latter himself. Whenever he can share stores about his self proclaimed “ridiculous life,” he’s happy. “From being a skydiver … and working in HIV research … and getting my exes tattooed on me — more than once — there’s so much material. Where do I start,” he said.

“We can’t believe all the love the post has received and how viral it’s gotten,” said Arguijo. “I’m glad he’s received all the kind words and laughs — he deserves it. He’s a genuine guy. My friends and I loved him.”

How amazing is this idea to have an Uber menu of the different types of rides you’d like? Which one would you choose if you found this in Ure’s Uber?