The Truth Behind the Photo That Shamed This Mom

With great technology comes great responsibility. Not the actual quote, I know, I know – but it couldn’t be truer.

Nowadays, pretty much everyone has their phone on them at all times. While it’s amazing to have instant access to hundreds of your “friends” and followers at the tap of a button, some people have a nasty tendency to abuse the platform that the internet gives us.

This couldn’t be a better example of just that.

In 2016, Molly Lensing and her 2-month-old daughter were stuck at a Colorado airport. Molly is a hard-working pediatric nurse and mom-of-three living in Illinois, and she was having a terrible day. Her flight had been delayed and even re-booked several times, and she had been waiting in the hectic airport with her fussy, two-month-old infant for 20 hours.

While sitting at the gate, a male stranger seated nearby secretly took a photo of Molly and shared it on his Facebook page. The photo was of Molly sitting in an airport chair with her baby on a blanket, on the ground of the airport. 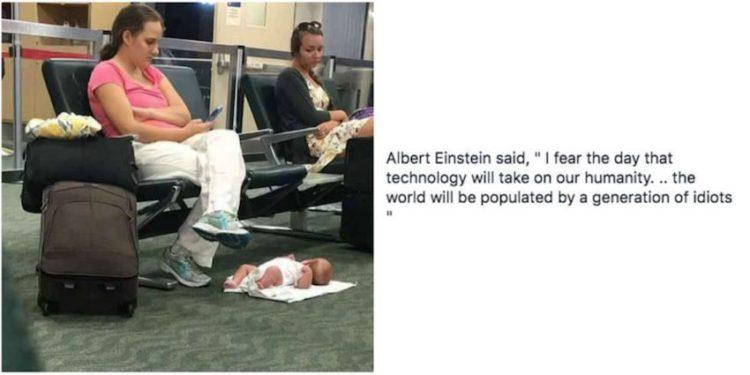 The man captioned the photo:

“Albert Einstein said, ‘I fear the day that technology will take on our humanity…the world will be populated by a generation of idiots.’”

Instantly, the photo went viral with more than 65,000 shares. People were quick to find out who Molly was via social media, where she became the victim of cyberbullying and harassment by hundreds of people hiding behind keyboards. These commentators shamed her for seemingly “ignoring” her baby to use her cell phone.

A year later, Molly spoke to TodayParents giving her side of the story.

“We had the unfortunate luck of being stuck in the middle of the Delta computer shutdown,” Molly told TodayParents. “My arms were tired. She needed a stretch. And I had to communicate with all the family members wondering where the heck we were.”

Molly’s side of the story was quick to garner sympathy from other parents, who are now shooting back at the internet haters criticizing the mom, who was doing the best she could.

What do you think about this controversial story? Do you think Molly’s privacy was violated? Make sure to share this story!