When you picture triplets being born (which you probably don’t do very often, honestly) you most likely imagine them being born all at once. Maybe there’s a few minutes or even hours in between the multiple babies, but one thing is for certain, they’re all born around the same time. As it turns out, that is not always the case. At least it wasn’t with parents Lisa and Adrian Shepard. After having their first set of what they thought at the time was twins, the couple had another child in 2009; she is the triplet born 11 years late.

In 1998, Lisa and her husband Adrian were struggling to conceive a baby, so they decided to try in vitro fertility treatments to encourage a pregnancy. Doctors collected 24 eggs from Lisa 14 of which were successfully fertilized after treatment. Two of the 14 embryos were implanted, and nine months later, twin girls Megan and Bethany were born. The 12 leftover embryos were placed into freezer storage at the clinic.

Well, in 2009, Lisa and Adrian decided to expand their family. With even less of a chance to conceive naturally, the couple decided their best bet was to try the same method that got them their beautiful daughters. So, they went back to the very same clinic and implanted one of the 12 embryos that had been frozen in 1998.

Before implanting the embryo, the doctors warned the family that Lisa’s body may reject it, which was a likely chance the couple was willing to take. But neither they nor the doctors anticipated this to happen.

Lisa’s body accepted the embryo and she had a perfectly naturally pregnancy and childbirth. In a miraculous twist of fate no one saw coming, baby Ryleigh — who was conceived at the exact same time as her twin sisters — was born 11 years after Megan and Bethany! 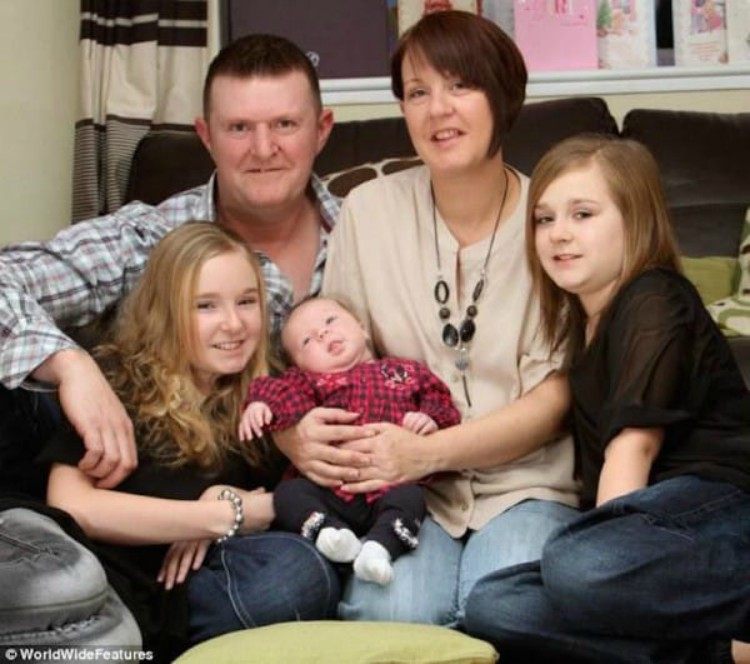 Worldwide Media
This is truly a testament to modern medicine! These three sisters, who share almost identical DNA and will be triplets in every medical and genetic sense, were born over a decade apart. There’s even a century separating their births.

While this might be the most bizarre childbirth story we have ever heard, it is also a beautiful one! We’re so glad that the family had the option to not only have children thanks to these modern advances, but to expand their family years later. And, even better, all three girls are from Lisa’s actual eggs, making them her biological children when she thought it would be impossible for her to have children at all.

Understandably, doctors have been blown away by this medical miracle, but it’s more common than you might think. Over 500,000 embryos are currently frozen in the United States alone and Dr. Jani Jenson tells MSNBC that the scenario of parents coming back for more frozen embryos is becoming more and more commonplace.

Despite the fact that Britain (the home of the Shepard family) encourages families to only implant one frozen embryo using the in vitro fertilization process at a time, all three of the Shepard children are healthy, safe, and happy to see their newest sister brought into the world!

What do you think of this incredible story? Share your thoughts in the comments section below.