When you hit 30, 35, 40, you might find yourself wondering what you can do to feel young again. Maybe the answer is a new eye cream, or doing yoga every morning, or eating your leafy greens every day.

While all of those things may work just fine, interior design expert and HGTV star Joanna Gaines has a more unexpected idea. Have a baby.

It might sound a little strange and counterintuitive. Have a BABY at age 40, and I’ll feel young? Yeah right. It sounds like it would do the complete opposite.

But Gaines, 40, who recently welcomed fifth baby Crew with husband Chip, says she’s found that she feels more alive and herself than ever. She didn’t feel this way with her first four kids (the first of which she had at age 27), but she says that having this fifth one later on in life, at an age when lots of women scoff or worry they can’t get pregnant anymore, truly made her feel, well, younger.

“It’s brought this whole new thing for me where I’m a lot more laid-back,” she said. “People joke that I’m the ‘Fun Jo’ now. I realize there has to be spontaneity, and schedules kind of go out the door. It’s like, ‘Hey, if I don’t get to it, it’s fine.’ I’ve just relaxed so much more, and it’s been fun for me.”

This could maybe have something to do with the fact that her other kids are significantly older than their baby brother. There’s Drake, 13, Duke, 9, Ella, 12, and Emmie, 8. And with Crew not even one, Gaines says she finds herself feeling like he’s her first-born all over again, and yet, with more experience than when it was actually her first time. 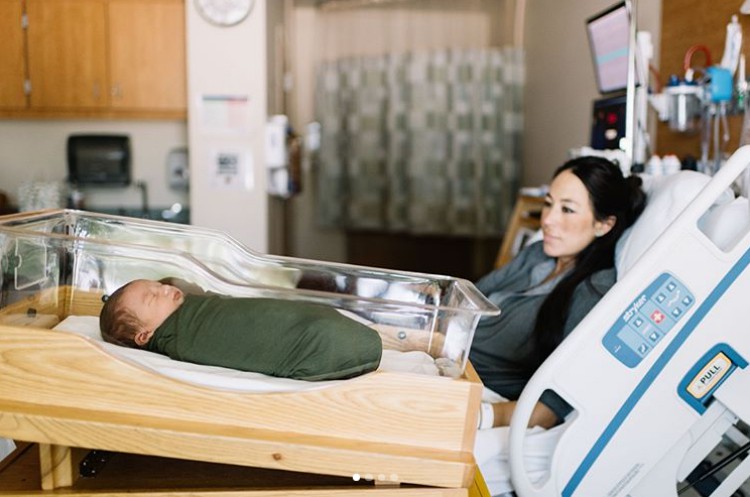 “I find myself researching stuff that I should know, and I don’t know it,” she said. “Like how do you get your baby to sleep through the night? [Or] if he’s in his room crying, I’ll go and get him, where with my other ones I was a little tougher.”

It kind of makes sense, we suppose. And she’s not the first seemingly young-feeling celebrity to give birth in her 40s. She joins the ranks of older moms Halle Berry, Gwen Stefani, Selma Hayek, and many others. 40 is the new 30 anyway!

We do have one question: If Gaines feels her best with a newborn at age 40, does that mean there’s more on the way for the family of seven? She says they’re not necessarily going to have another…but aren’t necessarily done having kids either.

“I thought I was done, and then we had Crew,” Gaines admitted. “But Chip’s always joking that he wants him to have a little sister. No plans for another baby, but then again, we’ve never been planners anyways.”

Well then! We’ll just assume for every baby in your 40s, you feel one year younger. We wish, anyway!

It’s isn’t ALWAYS all rainbows and sunshine, however. There is something that Gaines says she feels guilty about in terms of mom-ing. Hear her thoughts in the video below.


What do you think of Joanna Gaines saying she feels younger having a baby at 40? Do you know anyone who’s had children into their 40s? What do they say about their experience?