Living in New York City, you have to imagine you’ll have a couple cool celebrity sightings. Maybe you’ll share a subway car with Kevin Bacon or bump into Anne Hathaway at a Starbucks every now and again. But we doubt that anyone has had a celebrity run-in as epic as this. Photographer Meg Miller had what can only be described as the ultimate NYC celebrity moment when none other than Tom Hanks approached a newlywed couple she was photographing in Central Park. That’s right – this couple got photobombed by Forest Gump. Does it get any cooler than that?

The NYC couple had decided to take their post-ceremony pictures in the park, on one of the running paths. Thankfully, Miller said joggers were mostly staying far away from the photos, but at one point she had to stop photographing to let “this guy” pass when he was drawing too close to the couple.

But the guy didn’t pass. In fact, he wasn’t just “some guy.” Essentially, he was THE guy. The apparent stranger approached the newlyweds, Elisabeth and Ryan, taking Miller by surprise. According to her, he “took off his hat, just leaned right into the group, and said ‘Hi, I’m Tom Hanks,’” she said.

That would be the moment that my heart stopped functioning. 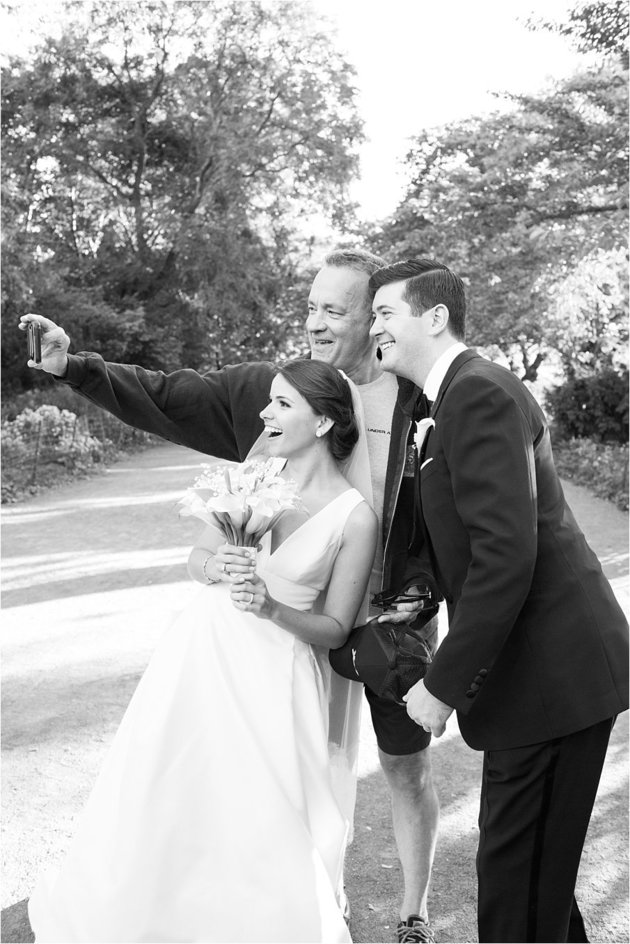 Hanks then proceeded to shake hands with the couple, kissing the bride’s hand, and wishing the pair congratulations. They offered to have him join them at the reception, saying they had an extra seat. Always the class act, Hanks politely declined, saying he had dinner plans already made ― but he didn’t part ways without offering up a few wedding services of his own.

“He asked if they needed a wedding officiant, because he is an ordained minister,” Miller said.

After taking a final selfie with the couple, which he posted on his own Instagram, Hanks just “sort of took off running,” Miller said. We doubt that they would have even recognized him if he hadn’t stopped to say congratulations.

Miller told The Huffington Post that she has never experienced a “Tom Hanks-level celebrity” at any nuptuals, so the encounter was a first for her. We’re sure it was a first for the couple, too, considering the baffled and thrilled looks on their faces. Although, you could meet a million celebrities, and it would still be awe-inspiring to meet Tom Hanks, wouldn’t it?

Thanks to a video taken by the couple’s videographer, First Day Films, the unforgettable moment has been captured on video for us all to enjoy! Thank goodness. As great as these photos are, nothing captures the brides’ priceless reaction better than the video below! She is so star-struck, she tries to awkwardly shake Tom’s hand twice, which he covers up by kissing her hand. What a downright gentleman you are, Tom Hanks.

What do you think of this epic celebrity photobomb? Do you think you would have reacted in the same way as this bride and groom? (I personally think I would have burst into tears.) Share your thoughts in the comments section below.