Watch How this Toddler Catches the Beat

I don’t know what Bruno Mars sprinkles in his music, but his songs have a way with people. A way that makes us sing, dance, and have a good time. It’s hard to escape it.

Even though “Uptown Funk” came out over two years ago, it’s still a body rocker. That song. It crosses age barriers, plays during sports events, is a wedding staple, and can get first responders moving. Without fail, it turns kids into tiny dancers.

A perfect example is this video featuring a toddler named Maddie who knows how to entertain herself. Caught up in the whirlwind that is funk, she’s jamming in her car seat to a G-rated version of the hit song. Her shoulder and head bop is real subtle, like the kind you do when you’re sitting at a red light.

Let’s admit it: not everyone has rhythm. Part of moving to a beat is having good timing. And that’s not something that can really be taught. You’ve got to feel it, just like little Maddie. If you watch closely, it looks like she’s mouthing the lyrics a little bit. Notice her finger moving to the beat. It just gets cuter from there.

Oblivious to the giddy audience around her, Maddie seems like she’s waiting for her favorite part to come in. Straight-faced and in her own party world, she’s not letting anyone kill her vibe. That’s how to do it. As the clean version rolls on, in comes that “Girls hit your hallelujah – woo!” part, and Maddie’s fingers go up. It must be Saturday night where she is because as soon as the “Don’t believe me just watch!” drops, it’s on. 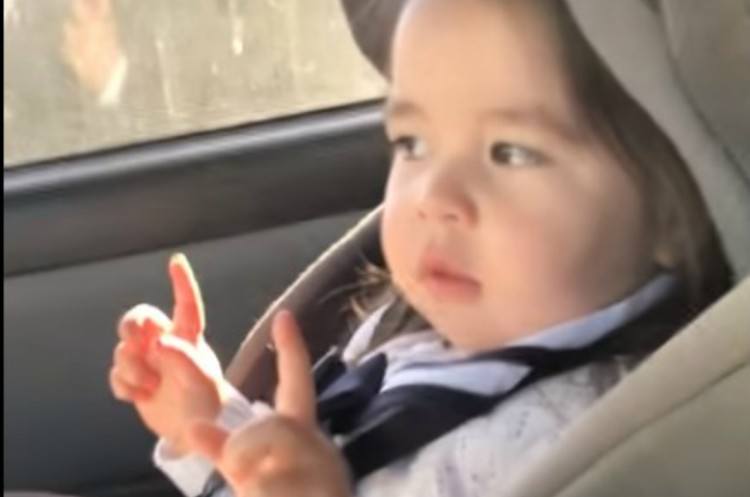 Ethan Than
Maddie is bringing it like she’s in the video with those guys. Arms waving, neck rolling, she’s riding the beat like a pro. The seatbelt is holding her back, but nothing can stop her from feeling the music. Watch the hands, y’all, watch those hands.

Her family is enjoying the show, and Maddie’s uncle Ethan is the guy behind the camera and the YouTube posting. Currently, the adorable tot’s garnered over 7,000,000 views on the site and climbing. It’s only been a week!

Hey, we know some of you are wishing you had this baby’s rhythm and swag. Depending on how many times you watch this clip, you will at least be granted an earworm for the rest of the day. That’s right, you won’t be able to get this song out of your head.

We love seeing kids get their dance on to universally loved songs like this. Who doesn’t love watching cute babies boogie? It’s got to make you smile. What would be extra cool about this little girl’s newfound fame is if there’s a new dance named after her. Everybody, do the Maddie! What say you, Internet?


What do you think of this hilarious video and Maddie’s impeccable timing? Do you have any toddlers in your life who can drop it like this? Be honest, what do you do when “Uptown Funk” comes on? Share with us in the comments!
Share on Facebook
Most Popular