When parents pack on the PDA in front of their kids, things can get a little weird. Older kids tend to be very vocal with their disapproval, with even a smooch eliciting a long “Eww!”

We think babies aren’t really paying attention and don’t understand what’s going on. We think toddlers don’t care. But they’re little people and have feelings too. And the way they express them can be hilarious.

In this video clip from America’s Funniest Home Videos, you see a couple showing each other affection with a quick kiss. From the start when their lips are locked, there’s a tiny eye peeking out from between their faces. We’re soon brought up to speed on the third wheel – it’s their toddler son. There to enforce the “No Kissing on the Premises” rule, he quickly puts an end to things.

Gee, guess he’s not a fan of grownups kissing. In addition to his stern “no kissing” declaration, the toddler spreads his hands over mom and dad’s faces to ensure that they part ways. Why would anything be unclear about this directive? It seems these rebellious parents are eager to test the limits of this law. They go for it again. 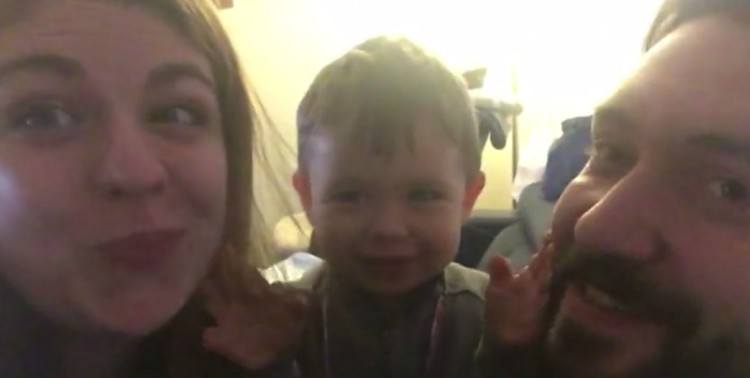 AFV
This time they go into burst mode and get another scolding from the chief. No kissing. No kissing. NO KISSING. What don’t they get about that? Continuing her dance on the other side of the law, the mom then decides to tease the little guy directly: “Can I have a kiss?”

She shouldn’t have said that. No more Mr. Nice Guy because this time she got a verbal “No kissing”, a head shake, and two pointed fingers. When TWO fingers get pointed in the face it means quit-it-before-you-make-me-lose-my-cool.

Actually, this tot’s reaction is common in young kids, but seeing parental affection can sometimes be a good thing. These parents weren’t going too far with their G-rated PDA. Some studies, like one published in the journal Health Psychology, note an improvement in physical health when kids are around parents who show warmth and romance to one another.

It’s good for kids to see their parents show each other love, as it’s a way to demonstrate what a caring and safe relationship looks like. It’s one of those things they need to learn about growing up. Additionally, happiness is contagious! When mom and dad are happy, it usually trickles down to the child too.

If they’re used to getting lots of hugs and kisses themselves, then it’s totally natural for babies and toddlers to get a little green when their parents shower each other with love. With this little boy, we’re not sure if he’s grossed out or jealous, but if they keep this up into his teenage years they can count on him being disgusted. That’s totally natural for that age group.

Watch the video to see this adorable kid break up the love fest. He’d make a great referee someday!


Do you kiss or do other forms of PDA in front of your kids? How do they react when they see it?