Hurricane Harvey was the first major storm of the 2017 hurricane season, which began on June 1st and will end on November 30th of this year, and it has caused horrific damage everywhere it’s touched down. Although the storm tore through South America (causing one death in Guyana), the hurricane reached its peak on August 25th in Houston, Texas.

This is the first hurricane to touch down on American soil since Hurricane Wilma in 2005 and the damage has been unprecedented for Texas; FEMA director Brock Long called Harvey the worst disaster in Texas history.

It’s likely that you’ve seen some of the terrifying footage on the news, as rescue efforts work tirelessly to save as many people as they can. Tragically, 47 lives have already been taken as a result of the storm and a historic $23 billion of damage has been inflicted on the area.

While winds reaching 130 MPH were a terrible factor, the real danger was the extremely high rain falls, which flooded the area under 51.88 inches of water (surprisingly, this falls just short of the national record, which was 52 inches in Hawaii). That depth of water is almost enough to engulf a six-foot tall person, a frightening truth which truly illustrates the danger of this hurricane. 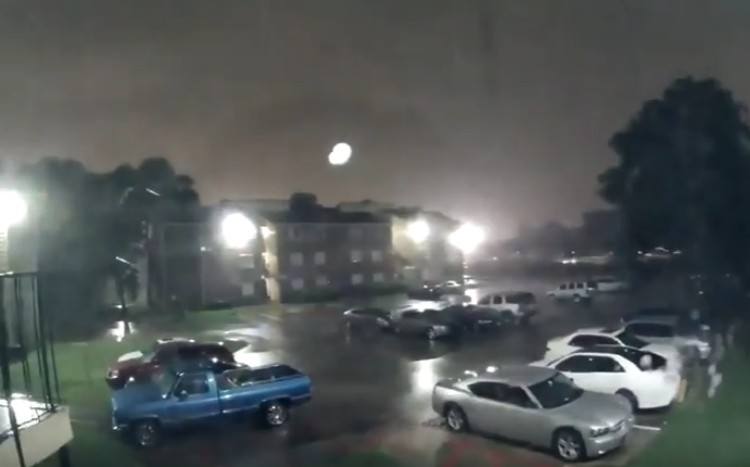 News Compass
But nothing really shows just how dramatic this rise of water was better than this chilling timelapse video. This footage from Houston resident Exavier Blanchard was published by News Compass, and it chronicles the first few hours of Hurricane Harvey on August 25th.

Although the video is covering hours of rainfall, it’s been elapsed to be under a two-minute video. But it only takes that long to see how dangerous the destruction has been from this tropical storm.

The video begins on what looks like an apartment building parking lot, maybe just under 20 cars are visibly parked. Rain is falling down hard, whipping against the camera lens, and in the first 20 seconds of the video, we see police escorts come to help some people move their cars. Only a few remain in their spaces.

By 25 seconds in, half of the car tires are submerged in water. By 35 seconds, only half of the cars are visible. This disaster is terrifying to see on the news (and, we’re sure, indescribably traumatizing to experience in person) but to see the damage sped up in this way is absolutely chilling.

If you have the ability to, please take a minute to donate to the organizations that are providing aid in Houston. Some of the best ways to help are by donating to the Red Cross, the Houston Food Bank, or the South Texas Blood and Tissue Center. Any small donation can make a huge impact after this devastating tragedy.