Watch How this Tiger Reacts to a Pregnant Woman

Animal encounters at zoos are generally limited by enclosures for everyone’s safety. In those situations, it can be moving to lock eyes with an animal or get an unexpected reaction from one.

But animals are intelligent, and of course have feelings of their own. Wild animals have ways to communicate with us humans that are either easy to understand or not so easy. A pregnant woman had an interesting one-on-one encounter with a tiger at her area zoo that she won’t soon forget.

Natasha Handshoe was attending an event at Potawatomi Zoo in South Bend, Indiana with family. At 27 weeks pregnant, the mom-to-be was hanging out in front of the tiger exhibit when she caught the attention of one of its residents. 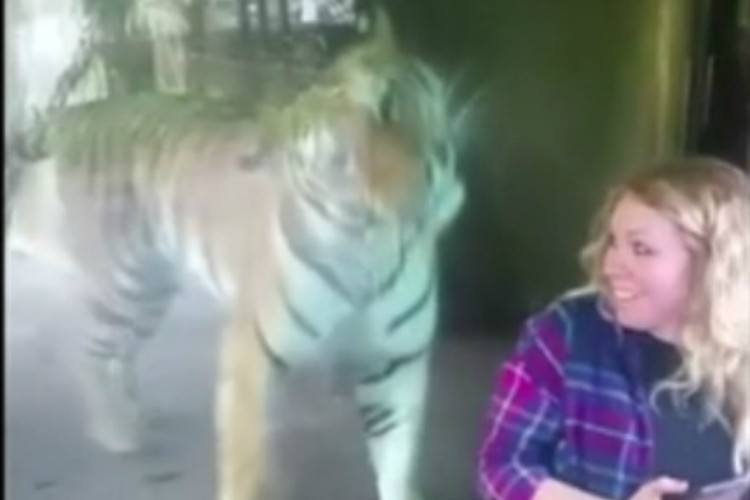 
In this video shot by her cousin, Natasha is seen sitting up against glass at the exhibit when she realizes she’s attracted the curious eye of Morgana, an Amur tiger, and starts to snap pics. As Morgana rubs her face against the glass, the young woman is excited that the tiger is so close to her. The tiger inches closer to Natasha’s back, clawing and pawing at the glass.

When Natasha stands, the tiger continues to follow her movement, and touches the glass as if she’d like to come through it. She sniffs, she rubs, she looks. It’s when Natasha climbs up to get a better view that Morgana also decides to get a better look. . .or smell.

With her rotund belly pressed against the pane, Natasha tries to connect with the tigress. Now at eye level with Natasha’s tummy, the animal is so intrigued that she takes a long whiff of her entire upper body, and then pauses to cozy up to her belly. And by cozying up we mean a warm snuggle with her head, just like a small cat.

During the interaction, the young ladies are heard “awing”, with one woman wondering out loud if the tiger realizes Natasha is pregnant. So far, this video has racked up over 3,000,000 views and counting, and many people were wondering the same thing. Could Morgana sense the pregnancy? And further, was she wanting to hug the baby?

According to Sanctuary Asia, one of the ways that tigers communicate is by touching their faces or bodies against each other. This is how they get to know one another’s scents. In captivity, they may also caress their caretaker with their faces to express affection or a need.

Mama tigers will often rub their heads on their cubs, and courtship rituals also involve similar gestures. With their sense of smell, tigers can also assess the gender and reproductive state of another tiger.

Morgana could have been trying to meet Natasha and her baby to make a new friend. On the other hand, this could be a case of: “Morgana, what long teeth you have. . . “, and, “The better to size you up with, my dear. . .”. The web seems divided, but we’ll let you watch the exchange and make up your own mind. Either way, it’ll be a great story for Natasha to tell her new baby!

What do you think of the beautiful big cat’s behavior? Do you think tigers like Morgana can sense pregnancy?