Ah, there’s nothing like a trip to the zoo. Whether you take your kids, or go as an adult, a trip to the zoo is always both educational and fun. It’s especially cool when the zoo you go to houses such unique animals you’ve never seen before. For example, a white tiger. Ever head of them?

Normally, when you think of tigers, perhaps you imagine them with an orange and black striped coat and ferocious demeanor. While a white tiger might still have the latter, and do still have their white stripes, they’re white (or near-white) in color.

White fur on a tiger is pretty rare, occurring in as few as 1 in 10,000 wild tiger births. They occur when two Bengal tigers that carry a recessive gene controlling coat color are bred together. So cool!

Like other tiger species, the white tiger is known for being a solitary animal, meaning they’re better able to sneak up on their prey and effectively hunt them down.

Well, at least when they’re in a wild jungle. Recently, one white tiger at the Moscow Zoo in Russia tried to do just that at the zoo, but totally failed. Perhaps that’s because his prey was a human, and there was a huge glass barrier in front of him preventing him from lunging!

In the video below, one zoo goer stands in front of a white tiger display with his back to the single animal in the exhibition. We see as the tiger engages in his typical tiger behavior—slowly but surely, the tiger sneaks up behind the man, looking hungrier and hungrier by the second. 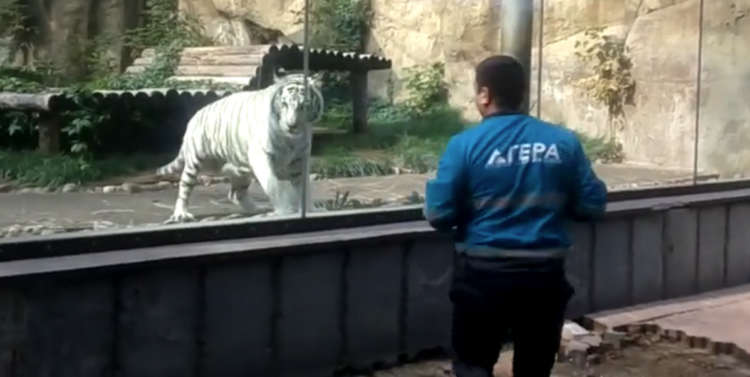 It’s fascinating to see how gradually the tiger walks towards him, thinking that the man had no idea he was behind him. And if he were in the jungle, his poor prey would have no chance of getting away!

But of course, this man knew exactly what was happening. The man standing with his back to the tiger moves ever so slightly to instigate the white tiger and suddenly, the tiger makes his move and lunges at the man!

The man filming the video screams his name and the first man jumps out of the way—but whether or not he jumped out of the way, the glass barrier of course stops the white tiger from chowing down on his human lunch. Poor tiger totally forgot he was captivated in a zoo!

This was a pretty cheeky thing to do—there’s no guarantees the glass would’ve held up to a tiger’s fury. While we’re glad it did, we can’t help but imagine what would’ve happened if the tiger broke through the glass. This man would’ve had no chance!

You can watch the crazy moment in the video below!

What do you think about this moment? Isn’t it interesting to see how a white tiger would normally hunt down his prey in the wild jungle? Would you ever stand in front of a tiger display like this and instigate a tiger like this?