One of our favorites is this rapping family, who wrote the most creative song to the tune of Vanilla Ice’s Ice Ice Baby to announce their third child—aka “Thrice Thrice Baby.” Dad doesn’t miss a beat while his wife Sarah and two kids, Joey and Adele, act as his backup dancers in the car.

Or take this insanely unique pregnancy announcement: In a total twist of events, this husband found out that his wife was pregnant even before she did. He then announced to HER that she’s pregnant. Can you imagine?

Sometimes the reactions to pregnancy announcements are even better than the actual announcement. This daughter told her mother she was pregnant while taking a photo—and she literally fainted on the spot! Don’t worry, she was okay, just in a huge state of shock!

Then there’s this dad’s reaction when he finds out his daughters are pregnant, which has us wiping away all of the happy tears. His twins managed to get pregnant right around the same time, and when he realized both were pregnant, he completely lost it!

Now we have another pregnancy announcement that’s recently made its rounds on the internet due to it being completely unexpected for the receivers—two teenage brothers. The boys, Lewis and Reece, thought they were done with having siblings, until their parents sat them down to tell them some big news. 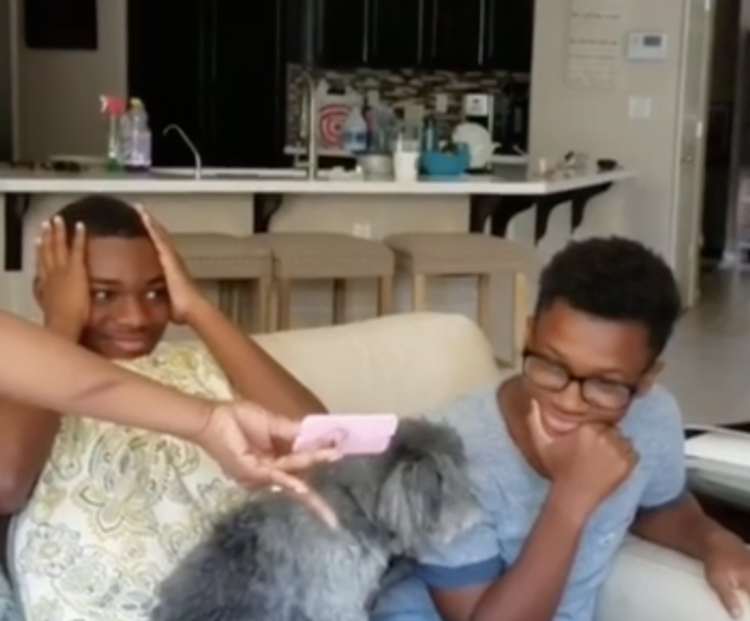 At first, the young men think that their parents are pulling their chain, but once Mom shows them several positive pregnancy tests, it starts to settle in that the pregnancy is not a joke.

Then their dad takes it one step further and blurts out, “We’ve been having sexy time!” Because that’s EXACTLY what you want to hear about your parents when you’re a teenager, right?

The boys can barely move at this point, and just stare wide-eyed at their parents, and even exchange glances with each other as if to say, “Is this for real?” Mom is laughing, and Dad is still alluding to how babies are made. Oh brother. Literally!

After a few seconds for the news to really set in, one of the boys finally could muster up a “That’s crazy.”

Perhaps the funniest part about the announcement is the dog’s reaction—which is pretty much the same way the teenagers reacted: Sheer shock!

We’re sure once the dust settled a bit, the boys were able to warm up to the idea of getting a new little sibling, but to see the whole hilarious pregnancy announcement, check out the video below!

What do you think of this pregnancy announcement? How would you react if your parents told you they were having another baby when you were a teenager?