Parents of infants, listen up! We’ve recently discovered a feeding-time product that can only be described as a legit “holy grail.” It’s called The Beebo and it has completely transformed the way we bottle-feed our little ones. In fact, the light-weight device has allowed us to literally RECLAIM our right hands during feeding time, and it will for you, too!

Here’s how it works: Drape the device over your shoulder and insert your baby’s favorite bottle into the rotating foam disc. Re-position The Beebo so that it rests high on your shoulder, then adjust the bottle with the 360-degree turning mechanism to fit your little one’s preferred feeding position. Once you’re all set, let that baby enjoy her liquid sustenance. Voila– and yum!

How does it feel to have your hand back?! Pretty awesome, if you ask us. Now you can read to your baby, caress her, or even include her at the table during a family dinner while she eats (and you eat, too!). 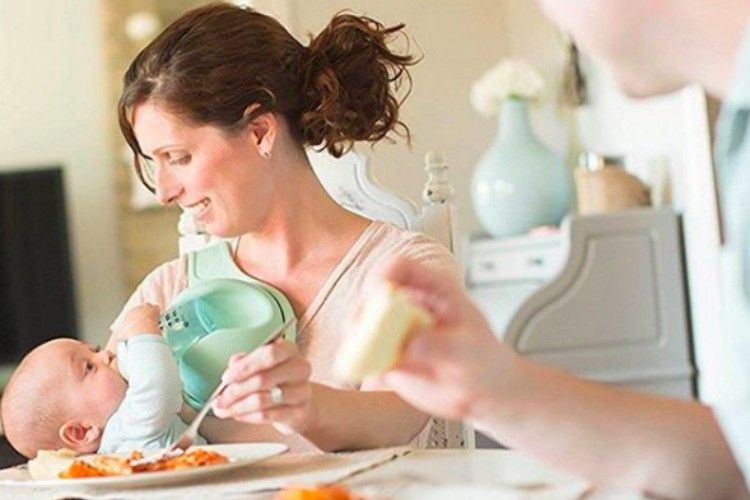 How one father revolutionized bottle-feeding

Martin Hill, an engineer, father of two, and, most importantly, creator of The Beebo, drew from his own experiences to invent this must-have baby product.

Hill told TipHero that The Beebo was inspired by his now 7-year-old son’s fussiness during bottle-feeding time–the infant had a hard time concentrating on the task-at-hand! But, once the inventor came up with the first prototype for The Beebo, his infant son took to the feeding device with “no hesitation.”

Hill improved upon his prototype after several families with babies approached him whenever he used it out in public, asking where they could buy the genius bottle holder. It was then that the dad knew he was on to something. He perfected his design and began marketing The Beebo to parents, a move that eventually opened the door to what is perhaps the most crucial leg-up any new entrepreneur can experience– Shark Tank.

Yep, Hill pitched The Beebo on the wildly-popular show and, apparently, he did really well because he secured investments from both Lori Greiner and actor Ashton Kutcher. Not too shabby!

Now that you know about The Beebo basics, it’s time for you to see how the product works for yourself! Watch the video below to learn more about what the special bottle holder can do for you and your baby.

What do you think about this bottle-feeding essential? Have you tried The Beebo before? If so, are you happy with the product? How do you keep your little one focused during feeding time?