When This Family Can’t Get Along on Thanksgiving, Little Girl Turns on a Special Song

We love Thanksgiving. The delicious food, the football, wrapping up in your warmest fancy clothes to beat the chilly November weather, and naturally, spending time with your loved ones. But as much as we love this aspect of the holiday, we would be fooling ourselves if we didn’t all admit how stressful having a five course dinner with your family can be.

There’s always some kind of political difference between family members, which leads to arguments about social policy and lawmakers. And if it’s not politics, then you’re passively aggressively dealing with your aunt brag about your jerky cousin’s new job, or ignoring your grandparents as they grill you about your life choices.

Yes, Thanksgiving is a time for family. And family drama in abundance.

If this at all strikes a chord with you, then you will love this skit from Saturday Night Live. 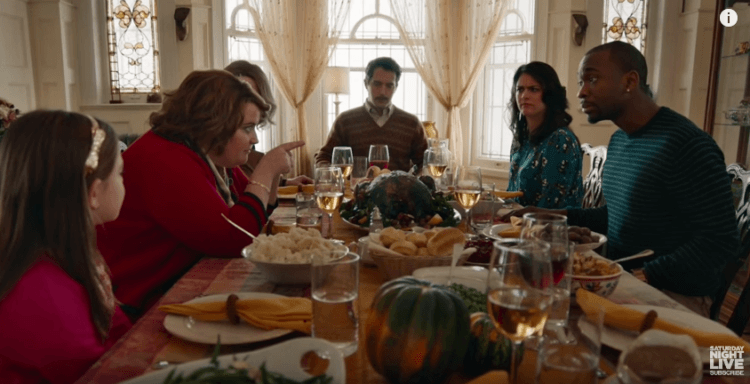 The scene opens on a Thanksgiving dinner, with a family sitting around a table with the turkey and all its fixing in the center. It isn’t too long into dinner before someone brings up a topic of political discussion and things start to get a little heated.

Things quickly take a turn for the worse as an older aunt and uncle type start to engage their younger niece and her boyfriend in a discussion on race, which quickly breaks into a full-blown argument.

But keep your eye on the little girl a the table, who is sitting sullenly, looking around at her fighting relatively as if she can’t stand it anymore.

Suddenly, she stands and goes to a boombox (which, of course, is just sitting casually on the table behind them.) She presses a button to play some music and the entire video immediately changes.

We would ALL be lying if we didn’t say that we know those opening chords better than just about any other song on the radio. And when Adele’s haunting opening lines start? We all mouth along in our cars dramatically. Don’t pretend like you don’t.

Well, this video perfectly captures that! Every member of the family begins to break into a flawless lip sync of “Hello,” the background of the video even turning black-and-white like Adele’s own video for the song.

With each familial interruption, the fighting start back up again, but not before the little girl can start the song back. Each time the remake of the video gets more and more hilarious, with everyone wearing Adele’s fierce nails, signature blonde bob, and wearing the fur jacket she wears.

Eventually they’re even taken to the site of the video, running around a windy garden dramatically, recreating the popular video we all love.

This might a spoof on Thanksgiving with your family, or a spoof on how insanely popular this song became, but it couldn’t be more true. There are little things, like this hit song, that unite all of us, and there’s no better time than Thanksgiving to focus on those aspects!

The moral of the story? Play Adele this Thanksgiving and avoid family fights once and for all.

What do you think of this hilarious video? Does this basically capture how your family acts on Thanksgiving? Share your thoughts in the comments section below.