The first day back to work after maternity leave can be rough on a lot of moms. After all, you just spent the last several months with your newborn baby learning every little thing about them. You know every dimple, every crevice…every way to keep that baby happy and safe.

That’s why Rebecca Tafaro Boyer told her husband David that she wanted “hourly updates and recaps” from him on how their 3-month-old baby, William, was doing, the day she went back to work as a nurse. She wasn’t trying to be annoying or make her husband feel incompetent—she just really missed her baby and wanted to be absolutely sure he was safe and sound.

David agreed to give his wife updates, so he sent her a photo of William snuggled up in his car seat after heading back home from Walgreens. As a nurse, Rebecca couldn’t help but notice the position the baby was in. The straps looked way too loose to her, and the chest clip seemed to be kind of low. She didn’t worry about sounding a little naggy; she just had to tell David to fix it

Thank goodness this all went down because about 15 minutes later, after David had tightened up William’s straps, he got into a pretty bad car accident. He was just a few miles from their house when a driver had pulled into traffic to turn left and David didn’t have enough time to stop. He slammed on his brakes but couldn’t stop the car from smashing into the front passenger side door of the other driver’s SUV.

If it weren’t for Rebecca telling her husband to fix the car seat just moments prior, William could’ve been seriously injured, and likely wouldn’t have recovered. In fact, he was so bundled up in the car seat that he didn’t even wake up from his nap. He was perfectly fine and safe! 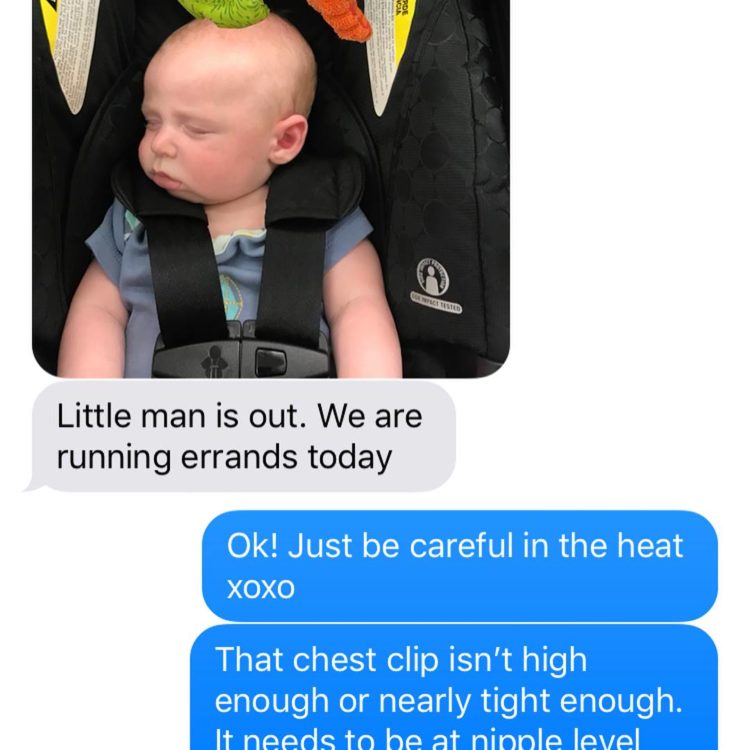 David, on the other hand, walked away with injuries that landed him on crutches. His foot was broken in three places and he had three dislocated toes. And let’s not even talk about the car—it was completely totaled. But Rebecca could’ve cared less about that. “Cars can be replaced — my boys can’t,” she wrote on her now viral Facebook recounting the horrific, yet crazily ironic, event.

Rebecca wanted to share her story with other moms to let them know how important car safety is—and perhaps, the importance of being a little pushy sometimes.

“I truly believe that the reason my family is at home sitting on the couch with a pair of crutches instead of down at the hospital is because of my annoying nagging mom voice,” she wrote.

And because we know you want to know, the car seat that saved William’s life? It’s the Britax BSafe 35 Elite seat. However, the parents have to now throw it away, and Rebecca shared why in her post:

“Any car seat that has been involved in a moderate to severe motor vehicle incident where the car cannot be driven away from the scene of the crash immediately becomes defective,” she wrote. “I am more than happy to shell out another $200 to Britax for protecting my baby.”

We don’t even want to imagine the outcome had David not texted his wife that photo! We’re so glad the Boyer family is safe at home with their son.

What do you think of this story? Do you know as much as you can about car seat safety? Check out Rebecca’s knowledgeable Facebook post to learn more.