The Future Is Now by Mic

Millions of women around the world are advised on how to be conscious of their health and bodies. Looking out for symptoms of cancer is high on the list, as the disease is something that does not discriminate, and can go undetected for years.

With breast cancer being a prevalent form among women, ways to screen for it are heavily promoted – be it at home or in a medical office. Doing self-examinations at home can be confusing, and some women lack confidence in what they may or may not find. One young man is hoping to change that.

Julián Ríos Cantú’s mother received a second breast cancer diagnosis when he was just 13 years old. Inspired by both of her cancer battles, the now-18-year-old has come up with an invention that could potentially lead to earlier diagnoses. His mother’s second diagnosis wasn’t caught until six months after her initial visit. Julián contends that early detection would have made a huge difference in her outcome:

“The tumor went from having the dimensions of a grain of rice to that of a golf ball in less than six months. The diagnosis came too late and my mother lost both of her breasts and, almost, her life.”

Julián, a college student at Monterrey University of Technology in Mexico, also runs a company named Higia Technologies. He’s designed a bra that utilizes biosensors to detect changes in breasts. Called “EVA”, the product assesses breast health by noting any changes in color, temperature, or texture. 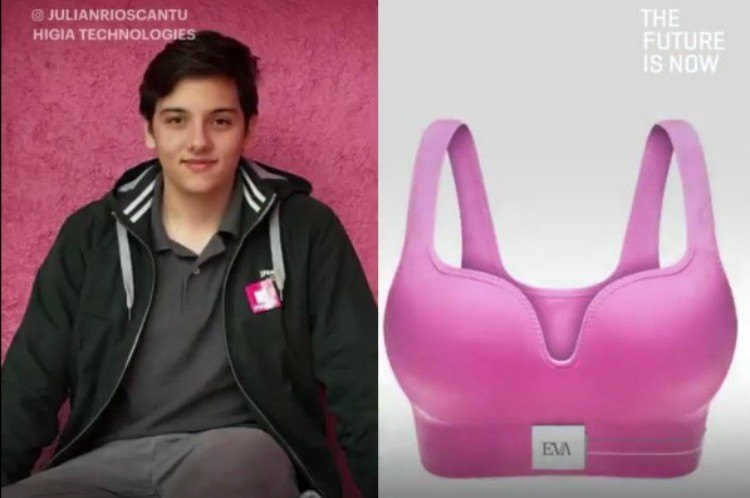 The Future Is Now by Mic

His prototype made his company 2017’s top winner in the Global Student Entrepreneur Awards. Here’s how it works: a woman wears the bra for 1 to 2 hours a week. An app tracks information collected by the bra’s sensors. If there is a substantial pattern of change, the woman will be prompted to see her physician.

As the video below from MIC notes, a breast with a tumor will have a higher temperature and have a significantly higher amount of blood flow. Julián and his team designed their bra to detect such abnormalities without being invasive. Though it’s still in the prototype phase, Julián hopes the bra will reach the public in two years.

His team is still working out the kinks in terms of data collection and analysis. Additionally, the technology would require rounds of scientific testing before hitting the market. Still, Julián remains inspired. He started working on his idea at age 17, gathered up some friends, and filed patents. The budding businessman is determined to change how breast cancer affects women.

Breast cancer is the most common form of the disease diagnosed for women worldwide. Having a reliable way to screen for cancer at home could potentially be a lifesaver, motivating millions of women to see a health care professional. Kudos to Julián and Higia for working as innovators in healthcare.

What are your thoughts on Julián’s invention? Have you been touched by breast cancer in some way? Which detection methods do you use? Share with us in the comments!