How to Avoid the Hidden Dangers of Riding in Taxis

These days, most people wouldn’t think twice about using a seat belt in their own car. Even if safety isn’t always at the forefront of their minds, skipping this step can mean receiving an expensive ticket, or dealing with that dreaded beep beep beep sound for the entirety of the ride. Paradoxically, many taxi passengers routinely ignore instructions to buckle up.

The statistics are puzzling. According to the NYC Taxi & Limousine Commission, about 57 percent of riders decide to skip the belt entirely.

New York City taxi passengers tell Inside Edition that they usually do not even consider using the restraints. As one woman put it, “We didn’t even think about it. We just hopped in and took off.” Somehow I think that we all understand that sentiment.

There sure is something romantic about hailing a cab on a New York City street and sliding in and out of the backseat with ease. It’s a commonly shared vision, but somehow seat belts never play a part in the daydream.

Michelo Laughlin from Cab Riders United tells Inside Edition that individuals riding in cabs generally don’t put on their seat belt because “they have this crazy illusion that somehow because we’re paying for the transportation, it’s going to be safe.” Now, let’s be honest with ourselves—I think that we have all fallen victim to this false sense of security!

One of the more common accidents that happens in cabs is especially cringe-worthy. Passengers who aren’t wearing seat belts will slam head-first into the glass partition if the cab stops unexpectedly or rear-ends another vehicle. Apparently this injury is so common that physicians have a name for it: “partition face.” Scary, right?

Patients suffering from “partition face” may end up with broken noses, eye socket damage, and injuries to the jaw. 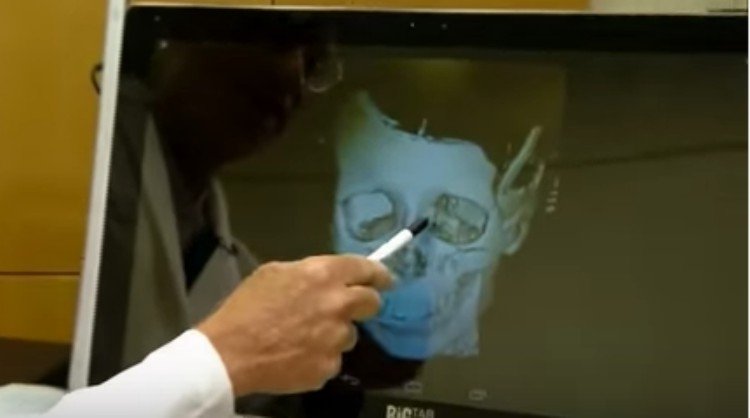 Inside Edition
Matthew White, M.D., from NYU Langone Medical Center, treats many patients who have sustained these facial injuries. White tells the Huffington Post that the wounds are “devastating.” He adds that “The momentum of the force [of the crash] carries the passenger forward into the acrylic glass and slams their face right into it. There is a lot of bone trauma.”

Celebrity victims of similar crashes include mathematician John Nash Jr., broadcaster Bob Simon, and, most famously, Princess Diana. These figures had all decided to forgo seat belts in their hired vehicles, and, sadly, lost their lives.

So, we all know that wearing a seatbelt is safer than the alternative, but just how much safer is it? According to the CDC, in 2009, 53 percent of passengers and drivers killed in car accidents were completely unrestrained.

Inside Edition
In fact, on average, wearing a seatbelt reduces your rate of injury by 45 percent and your chance of dying in a car accident by 50 percent. The numbers don’t lie—safety belts really do save lives.

Watch the video below to see examples of some of these accidents. After watching some of the footage, we doubt you’ll ever skip fastening your safety belt ever again!

Would you ever go seat belt-free? Have you ever been in an accident in a cab? Tell us all about your thoughts and experiences in the comments section below!