How many of you have given private concerts to yourselves (or your pets) as you belt out your favorite songs in the shower? It’s fun, right? Then you follow up that riveting performance with an encore or two in the car. We see you.

While you or your family are used to hearing your voice make the most of the acoustics in your surroundings, there aren’t many who take it beyond the comfort of their own space.

Sure, you’ll find the occasional crooner singing in a public restroom who mistakenly thought they were alone. Or you’ll hear someone singing along to a song blaring through a store’s speakers. It’ll make you smile.

The little girl in this video was having a good time casually singing to herself as she shopped in Walmart with her mom. But her voice caught the attention of a fellow shopper who was beyond impressed.

Singing Adele’s “Rolling in the Deep”> is 8-year-old Kelsi Kee. The woman shooting the video approached the child and asked her to sing again, this time for the camera. She obliged and started belting out those first few low notes of the song just like a pro.

As her mother stood off to the side, a small audience gathered to listen to the talented young performer. Although a bit shy at first, once she sang the chorus for the first time, she took off! Not only does she know all the right notes to the song and is hitting them all, but Kelsi knows ALL the lyrics. 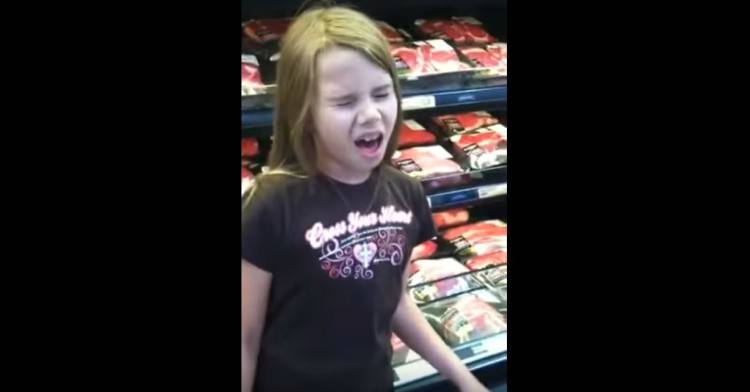 She’s got an amazingly strong voice, and folks who are standing there rocking with her agree. They’re clapping and commenting on how great she sounds. Watch the full video to hear this young lady slay this entire song without missing a beat— or one word! If you listen closely in the background, you can hear Kelsi’s mom say she’s been singing since she was two years old.

Of course, this video went viral, clocking in at over 3,000,000 views to date. Although this was shot in 2012, people are still watching it today. Even cooler? Kelsi is now a teenager who’s started on a professional path in music.

You can follow her blossoming career and catch some of her recorded performances on Facebook. These days, she’s singing in a rock/blues band and performs all over Texas. In addition to this YouTube video that made her famous, you’ll find others that showcase her amazing voice over the past few years on her channel. Check it out!

Some of you have probably heard people singing in the aisles of Walmart, but we bet it wasn’t quite this good! When people attempt to tackle an Adele song, folks get ready to either hate it or love it. For this little girl to nail it with this much success is proof that she’s the real deal. We can tell she’s got a bright future ahead of her.

What do you think of Kelsi’s talent? Was her voice an unexpected surprise? Do you think you could sing an entire song in public like this?