Surprise was not a new emotion for Mississippi mom-to-be Kimberly Fugate. At 42-years-old, Kimberly was about to go through an unplanned pregnancy – although not unheard of, having an unplanned pregnancy in your early 40’s is nothing short of unusual. To make matters crazier, Kimberly and her partner found out that they were having triplets, most likely identical triplets, at that. The circumstances were getting stranger and stranger. Then, out of nowhere, Kimberly spontaneously went into labor three months early. But it was during the emergency Cesarean section that the biggest surprise of all was revealed.

It was during the surgery that Kimberly was informed of a fourth baby, one that doctors hadn’t seen on any ultrasounds. They had gotten the number of babies wrong. As soon as she heard the staff saying “extra feet,” Kim immediately knew what they were talking about – and she couldn’t believe her ears.

But it was true. The four baby girls – Kenleigh, Kristen, Kayleigh, and Kelsey – were all born relatively healthy, even considering their premature birth. Doctors said that the entire situation is completely unheard of, especially considering all the circumstances. To have multiple babies past the age of 40 without any help from fertility drugs is exceptionally rare. To have QUADRUPLETS is even more rare and for all four babies to be identical is unthinkable. 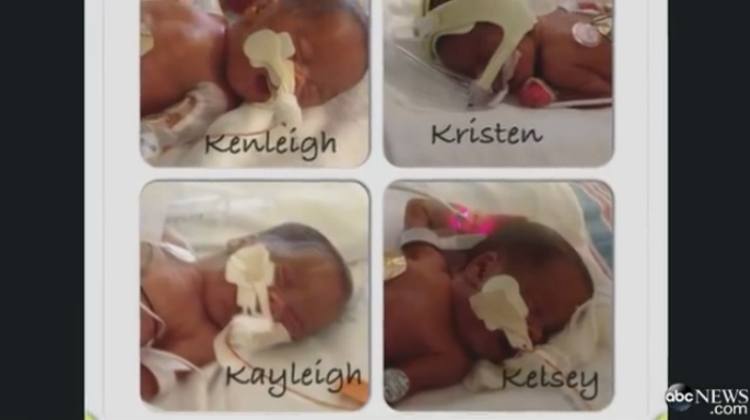 Roberto Tachinardi
The odds of this situation coming to pass? 1 in 13 million. Identical quadruplets have only occurred 60 times in worldwide medical history, making these baby girls something of a historical feat. When you consider the other circumstances of the situation, it makes the entire thing that much more incredible.

The quads stayed in the NICU for over a month following their premature birth as their lungs continued to develop. Meanwhile, Kimberly anxiously stayed at a nearby Ronald McDonald charity house. Weeks later, Kim was able to take her four beautiful babies home.

While this must have been a confusing and kind of terrifying thing for her, we can only imagine how blessed Kimberly must feel. She was able to have these four, healthy babies at her age, and they are nothing short of a medical marvel. Now that must be a pretty cool feeling.

And as for the doctors who misinterpreted the ultrasounds? Dr. Richard Besser of ABC News says to cut them a little slack! Although there may be some doctors “embarrassed” by this situation, Dr. Besser said there probably wasn’t a lot of room for the staff to clearly see the number of babies in the ultrasounds. Trying to make out this number in a cramped space on a 2D picture is very difficult, he defends.

Regardless, it must have given Kimberly a heart attack to hear this news in the middle of giving birth! But we’re sure the family is so blissfully happy about their new babies that they’re not interested in placing blame on any of the doctors or medical staff involved. After all, they are living with four little living miracles now!

What do you think of this incredible birth? Share your thoughts on this surprise quadruplet in the comments section below.