Teenager Haven Dockens has been dealing with the foster care system for 10 years, which is nearly her entire young life. But when she was placed under the care of the Dockens family, she knew she had found her forever home. For Christmas, she said, all she wanted was to be adopted by the family.

However, a plan for adoption had not been discussed, despite Haven’s obvious enthusiasm to the idea.

So when Haven’s foster parents randomly pulled her out of school, along with Haven’s five younger siblings, she had no idea what to expect. They were all brought to the local courthouse, where social services and the family’s lawyer was present.

The judge who was presiding asked the family to come forward, including Haven, who was still unaware of what was going on. When the Dockens’ lawyer started talking about how this adoption was something Haven specifically wanted so badly, we can see that the teen is starting to piece together what’s going on.

She and her siblings are the center of this trial, and they are being officially adopted. Right in time for Christmas. 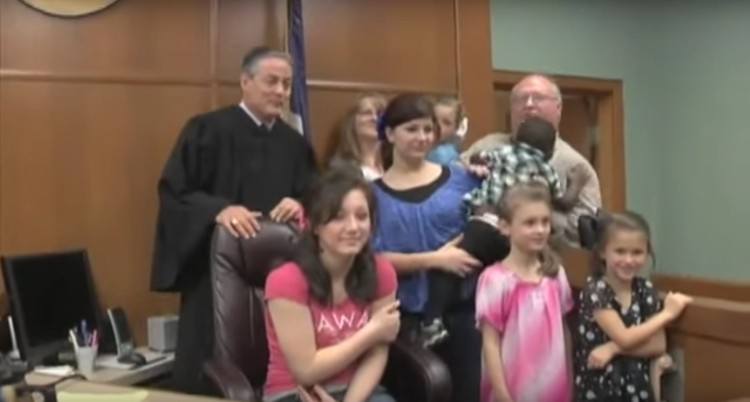 “Well, Haven, you’re here and you’re smiling,” the judge said to the teenager. “So I guess you’re happy with this, huh? Okay, well, I would be happy to grant it.”

Grinning from ear to ear, Haven looks like she’s close to tears as the judge and her new family applaud the happy news. Her wish has been granted, and she couldn’t look happier!

“Oh my God, this is the best Christmas I’ve ever had in my whole life,” Haven confesses to KFDM news cameras after the hearing. “I love them [the Dockens] so much. They mean everything to me…I’m just so happy.”

Along with her, Haven’s five other siblings have also been adopted by the Dockens family. The clan now has 11 children total, watched after by their two loving parents.

“Seeing the kids blossom when they’ve come from nothing and they’ve been abused in all sorts of ways, it’s just a true blessing,” Kristi Dockens, the mother of the adopted family, said to KFDM News. “It’s amazing to see that they’ve flourished and broken the cycle.”

Child Protective Services (CPS) says teenagers are the hardest to place in foster homes, and that the odds of an older child getting adopted into a forever home are much slimmer than that of a younger child. So for Haven, this is truly a wonderful miracle for her and her five younger brothers and sisters.

The Dockens have taken in kids from 19 months to 16 years old, all of whom now have a loving family to spend Christmas with for years to come. Happily, Haven and her siblings are officially a part of that happy family, making for a wonderful end to this holiday story.

What do you think of this surprise adoption? Is this a Christmas story that really warmed your heart? Share your thoughts on this adoption story in the comments section below.