Think about a women in your life who is around 45, 46, 47 years old. If she came to you and said she was experiencing intense stomach pains, what would you guess was wrong? Likely answers: things like gastroenteritis, irritable bowel syndrome, or gallstones; sometimes something as simple as indigestion or food poisoning; or maybe even something like a panic attack or a heart attack. If the symptoms were more in line with ongoing, low-level discomfort coupled with some weight gain, you might think, like Judy Brown did, that menopause was the answer. There are tons of possibilities, but also ones we would probably automatically rule out due to age and overall likelihood. Which means that we, like Judy Brown and her husband Jason, would have ruled out the actual cause of Judy’s pain. Can you guess what it was? Let’s review the symptoms:

Figured it out by now? Judy’s pain and weight gain was the result of this: 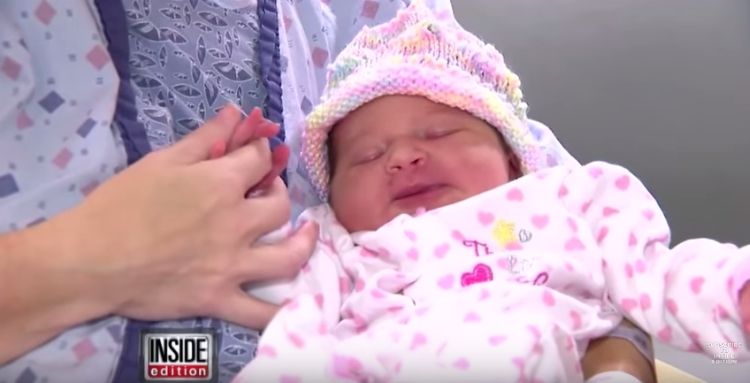 Yup, that’s a beautiful baby girl. Turns out, Judy was pregnant and didn’t know it. The sudden, intense pain that took her to the emergency room was her body going into labor, and she delivered her baby girl only one hour after finding out she was about to be a mom.

It’s one of those stories that sounds crazy to a lot of people, who understandably ask, “How in the world could she not know that she was pregnant?” In Judy Brown’s case, however, it makes a certain amount of sense that the idea wouldn’t occur to her. She’d never been pregnant before, so she had no prior experiences to help her understand her symptoms. After 22 childless years of marriage – and 47 years of life – Judy understandably believed that her child-bearing years were behind her, and chalked up the changes in her body to the change most associated with her age group: menopause.

What’s more, unexpected and surprise pregnancies happen a little more frequently than we might expect. The phenomenon is called a “cryptic pregnancy,” according to Women’s Health, and it can happen for one or more of the following reasons:

Those last two reasons seem to be what happened to Judy Brown. Luckily for all involved, her baby girl came out healthy, happy, and with an amazing story to tell— a true miracle baby. Watch the Brown family’s interview with Inside Edition to see how they’re dealing with this incredible surprise, what Judy’s doctor had to say, and to learn more about this amazing story.