Someone once said, “Dogs and angels are not very far apart,” and we couldn’t think of a more true quote—especially in relation to the story of what happened to a Florida resident named Maureen Hatcher.

The 62-year-old was home alone with just her labrador retrievers, Bella and Sadie, when she suddenly suffered a stroke and collapsed on her floor. The dogs of course gathered around her and at first, weren’t sure what to do, but were concerned as anything.

And just like that, Bella and Sadie understood and took off—and knew exactly what to do. A security camera at the front door caught the dogs running outside to alert the next door neighbor about what happened.

“I usually am very routine, but that day, I didn’t do my usual. I was sitting on the floor drinking coffee and saw [one of the dogs] outside,” the neighbor, Alexandra Naspolini, said. “Then I heard the other dog from [Hatcher’s] house barking.”

The dogs quickly led Alexandra back to the house. Naspolini tried ringing the doorbell and calling out to the home, but no one was answering.

“I was asking the dog, “Where’s mom? Where’s mom?”‘ Naspolini said. The dogs then led her right to Hatcher, who was unconscious. Naspolini immediately called 911.

When the paramedics showed up, they recognized the signs of a stroke, and were able to transport Hatcher on a stretcher to a local stroke center, where she received immediate treatment that saved her life. 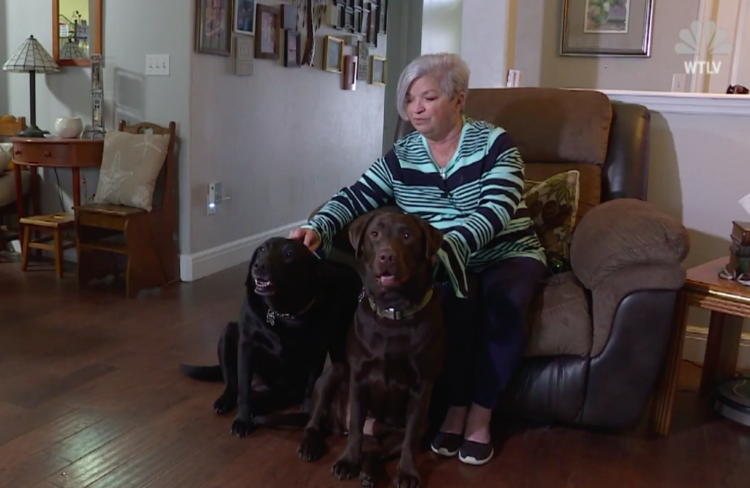 “When the brain is deprived of blood, cells die and permanent brain injury can occur. Timing is everything,” said interventional neurologist Nima Amim Aghaebrahim, who performed the treatment on Hatcher. “One of the most important factors that can lead to a good outcome for patients in these situations is to get the blood vessel opened quickly and successfully.”

Timing certainly IS everything. There are a lot of crazy things about this story that have to do with how time and circumstance makes all the difference…sometimes between life and death.

First off, Hatcher said she usually deadbolts her front door, even when she’s at home, but for whatever reason, she didn’t lock it the day this all went down. Because of that, the dogs were able to run out for help.

And because Naspolini wasn’t doing her usual routine and was outside, she was able to come to the house and call 911.

And because the medical professionals knew the signs of stroke, they took her to the facility she needed to go to get treatment.

Hatcher was able to recover within just a few days and feels blessed to have two angels—we mean dogs—in her life. We don’t blame her, these two are as loyal as they come!

To see clips of how the whole story went down, check out the video below.

How sweet are these dogs coming to the rescue? Can you believe how timing played such a part in this story? Do you know anyone who was able to recover from a stroke after a situation like this?