When Her Kids Were Uncontrollably Screaming On a Plane, a Stranger Stepped in to Help This Panicked Mom

If you’re a mom to young children or babies, you probably have lots of fears: That they’ll get sick, that they’ll run away from you in a crowded area, that they’ll be taken by a kidnapper. Oh yeah—and also how they’ll react on an airplane.

Planes are confined and compact—you’re basically on top of the person next to you. Let’s not even talk about how awkward of a position it is when you have to go to the bathroom and do that handsy waddle over their legs.

Point is, when you bring children onto an airplane, you don’t know how they’re going to react. You can prepare for meltdowns with coloring books and tablets, but if something goes haywire, then the whole plane is going to know it. And judge you. And be rude. And you’ll probably get kicked off and not make it to your destination and…

These were the (irrational) thoughts in mother of two Jessica Rudeen’s mind when she brought her four-month-old son and toddler daughter aboard a flight—and they were causing quite the ruckus. We’re talking screaming, kicking, the whole kit and caboodle.

“I honestly thought we’d get kicked off the plane,” Jessica said, who was about to either lose her mind or cry during the incident.

However, low and behold, the world works in such mysterious ways. It was at this moment Jessica realized the true kindness of strangers. Jessica posted about what happened on that flight in a way that would make anyone “awww” out loud. The post has been shared over 8,000 times and has more than 30,000 likes. You can read it here. 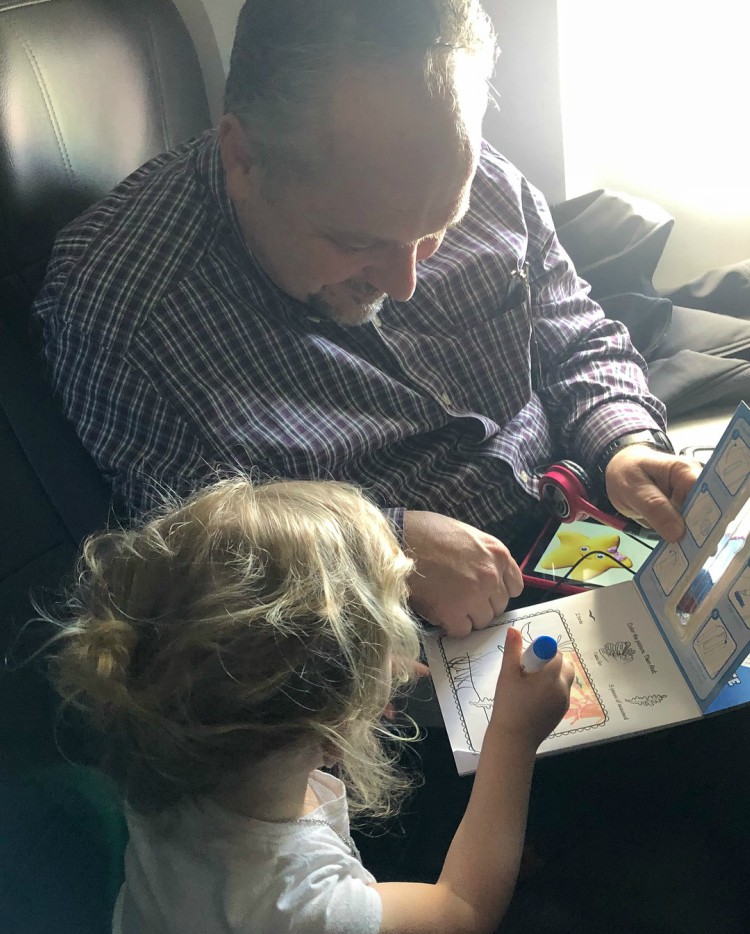 In it, she outlines how Todd, the man who just happened to be in the seat next to the family of three, helped her take control of the situation.

“This man reached for the baby and held him while I forced a seatbelt on Caroline, got her tablet and started her movie,” Jessica wrote in her post. “Once she was settled and relatively calmed, he distracted her so that I could feed Alexander.”

Before the plane even started moving, Todd was able to get both children to stop screaming. He could’ve stopped there, but didn’t. In fact, throughout the entire flight, he entertained the toddler by chatting with her, coloring with her, and watching a movie with her.

“By the end of the flight, he was Caroline’s best friend,” Jessica wrote.

The story doesn’t end there. Todd and Jessica both happened to have the same connecting flight and Todd was happy to walk with Jessica and her children (even holding Caroline’s hand) to get there, and then consequently switch seats with the person who was supposed to sit next to them on the second flight—all so he could help one struggling mom.

“Todd showed me kindness and compassion that I’ve never known from another person,” Jessica said. “I am blown away by God’s hand in this because we could have been placed next to anyone, but we were seated next to one of the nicest men I have ever met in my life.”

The world does work in mysterious and wonderful ways sometimes. To end the post, Jessica said that she’d like to find Todd so that they could stay in touch—and through the magic of social media, it worked. We hope they’re able to stay friends, and that her babies get to see the man who was so kind to them again.

Ah, so there is selflessness and good in this world. How sweet is this story? Have you ever flown with kids before? Would you have done what Todd did in this situation?