No matter their motivation for doing what they do, storm chasers witness Nature’s beauty and destruction. They often have to be ready at the drop of a hat for what’s coming. It’s all part of the gig.

Storm chaser Jason Weingart has been in the field since 2009, facing danger and uncertainty all over the country. He’s used to seeing furious lightning bolts and nasty tornadoes rip through towns. Along the way, he has also seen the devastating aftermath of raging weather.

This past April, he and his team (which includes his wife) were busy tracking storms in Canton, Texas. The eastern region hadn’t seen storms that severe in a long time, and Jason explains that multiple tornados were forming and touching down.

The second one caused a lot damage because it hit a densely populated area, and Jason remarked that it was difficult to follow due to its size and the area’s terrain. It was huge! As you can see in the video, a large, dark, gray-colored cloud is swirling in the sky. It’s moving and looks angry.

While assessing damage in the area, Jason and his wife came across a battered home where a woman was yelling for help. Jason jumped out of his car and approached her fence. Once within the gates, he learned that the woman, Sally Knox, owns an exotic animal ranch. 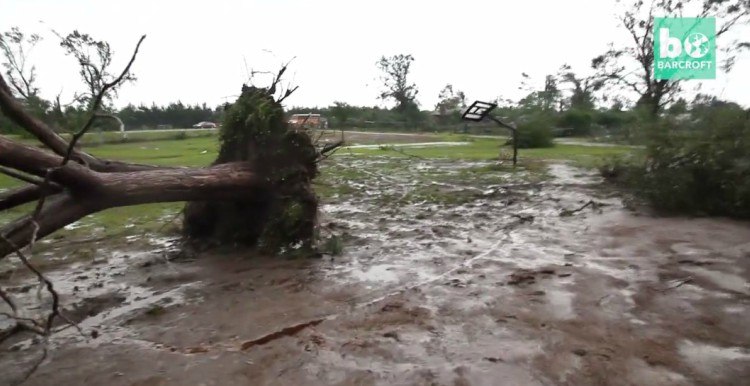 Barcroft TV
Dozens of animals were scurrying around everywhere – horses, dogs, camels, monkeys – and were scared, anxious, and in distress. Barns and other animal habitats were totally destroyed. She asked Jason to help her walk around to assess the debris, and look out for injured animals. That’s when they noticed something near one of the fences. Sally cried out, “Help me!”

Trapped under some bent up fence wire was a young colt who was only a few months old. Jason assumed the high winds from the tornado threw the poor baby across the yard. Covered in mud and unable to move, there was no way he could maneuver out of that on his own. Sally and Jason worked together to try to free him, with Jason wrestling the legs to move him.

It’s a nail biter, this one. Watch the video to see what happens after Jason pulls the frightened colt from the fence’s grip. It was touch-and-go. Even the German Shepard looked concerned and began sniffing the little horse. Keep watching to see how this intense rescue turned out.

Though he’s been storm chasing for years, Jason said that moment was the first time he’d ever seen damage so fresh, so soon. Because he is in unpredictable situations all the time, he’s learned to keep a level head when confronted with danger or an emergency. Hopefully Sally Knox and her animals received the assistance they needed after this scary event.

What do you think of Jason’s work and his timely intervention at that moment? Do you live in an area prone to tornadoes or other severe weather? How are your pets affected when danger like this is so close? Share with us in the comments!