The Starbucks Mermaid Went Through Alterations to Make Her Look Warmer

What’s in a logo? As it turns out, an awful lot! For years, companies have used powerful subliminal messages in their logos to attract consumers, with many practicing the discipline of “color psychology” to build some of their most influential marketing materials.

In color psychology, yellow logos exude clarity and warmth, orange ones radiate cheerful confidence, red logos represent youth, and green, growth and health. One of the most celebrated logos of our time is Starbucks’ Kelly green mermaid mascot, an image that seems to evoke coffee cravings in even the least-caffeinated of us!

Back in 2011, the brand went through a very necessary revamp following a nasty sales plummet. It was then that Starbucks decided to make some big changes, starting with its famous logo. The company enlisted the help of creative consultants over at Lippincott to update the image of the mermaid, a move that left them seeing double.

You see, once these creatives dissected the logo to their liking, they realized there was a bit of an issue with the mermaid’s features—she was just too darn perfect! The consultants came to the conclusion that the mascot’s symmetry was off-putting and made the brand “lack warmth.” So, they made some alterations to her features in order to achieve a more “accessible” vibe.

Obviously, the folks at Lippincott didn’t go overboard—the mermaid doesn’t look like she just stepped out of a Picasso painting or anything—but there are differences between her left and right sides.

Can you spot them?

What’s behind the Starbucks “mermaid?”

Ok, we know that we have been referring to Starbucks’ mascot as a “mermaid” throughout this entire post, but, as we learned upon further research, the Starbucks mascot is a siren, not a mermaid. Shocking, right?

If you are up on your Norse mythology, then you know that the one distinguishing feature of a siren is that she has not one but TWO tails, body parts that can be clearly seen on the company’s logo. But we’re just being nit-picky here…

In an interview with Starbucks’ blog 1912 Pike, the company’s creative director of the Starbucks Global Studio, Steve Murray, said that the company likes to think of its mascot more as a “real person” and less as a “siren.”

“She’s the biggest symbol of our brand, really, other than our partners [employees],” Murray mused. “She’s the face of it.”

It was back in 1971 that Starbucks first launched, long before it was the coffee powerhouse that it is today. The founders decided to name their business after a character in Moby Dick, so when it came time to create a logo, they felt it was best to stick with a nautical theme. 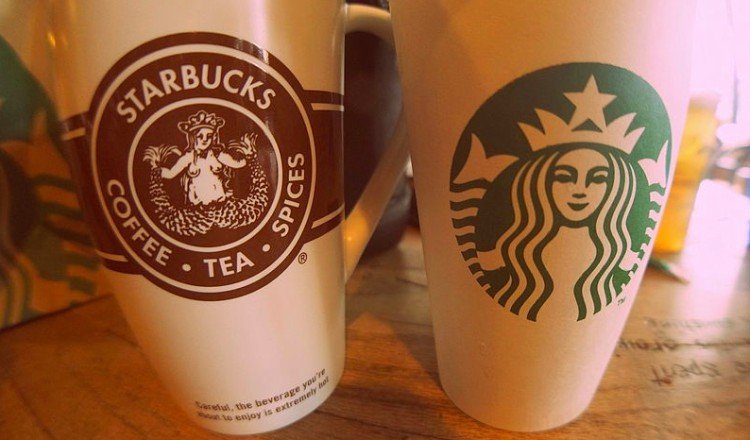 Since then, the logo has been updated several times, with the 2011 alteration, of course, being the most auspicious—and, as it seems, the least symmetrical.

To finally learn how the design team made this icon “warmer and more human” by changing her perfectly-symmetrical features, be sure to watch the video below. Can you spot the siren’s faults?

Were you able to spot the siren’s asymmetry before watching the video? Do you think it was a good move on the part of Starbucks to change up its logo? What do you order at the popular coffee chain?