What would you do if a squirrel ended up in your kiddie pool in your backyard? Chances are, you’d try to get it out and put it out of its misery, right?

That’s just what one girl attempted to do when her mother discovered a furry rodent frantically swimming around in a space he didn’t belong in her backyard.

“I called my daughter outside to see a squirrel trapped in my granddaughter’s kiddie pool; and of course, being the animal lover she is, she had to attempt a rescue,” said the mother of the woman who tried to get the squirrel out of the pool.

“I have to help him!” the woman says in response to seeing the squirrel flailing about in the pool.

And so she did. But her attempt didn’t quite go as planned. When the woman gets into the kiddie pool with a chair and attempts to coax the squirrel out with it, all hell breaks loose.

“The squirrel was not quite as grateful as she had hoped! It leaps at her face as she recoils in horror and runs away screaming,” the mother of the attempted rescuer said. 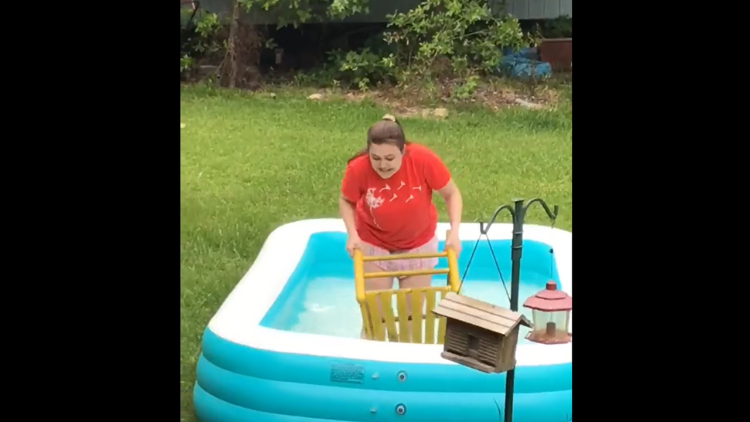 In a now-viral video, the woman gets into the pool with the chair, continuously telling the squirrel that she’s trying to save it and to let her do so. But unfortunately for her, the squirrel doesn’t really appear to be listening though it certainly offers some chuckles from those watching.

And then…it happens. Instead of hopping onto the chair and hanging on there so he could be let free, the squirrel leaps off the chair onto the woman’s chest and face in a frantic manner. The woman screams and drops the chair in horror. To her dismay, we can’t help but laugh.

Don’t worry, the attack was worse than it looked. “She came away with a scratch on her arm,” the mother explained. And it sure does make for a funny story (and video).

The good news is, the woman wasn’t too shaken by the incident and when she went to rescue the squirrel for a second time, she succeeded!

“After a cautious second attempt, she did indeed rescue the squirrel,” the mother stated.

We’re glad everyone fared well in the end—but not before giving us something to laugh about! To see the hilarious attempted squirrel rescue, check out the video below.

Have you ever tried to rescue a squirrel like this woman did? What would you have done if the squirrel jumped in your face as he did here? What other ways might you have attempted to rescue this squirrel in this situation?